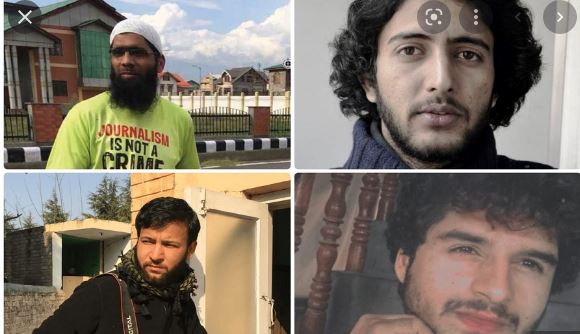 In a letter to the New Delhi-appointed Lieutenant Governor of IIOJK, Manoj Sinha, the groups drew his attention to the illegal arrests and subsequent incarceration of the aforementioned scribes and urged him to ensure their immediate release using his good offices.

The letter reads, “We, the undersigned 58 press freedom organizations, human rights organizations, and publications write to request your urgent intervention to secure the immediate release of Fahad Shah, editor of the online news portal The Kashmir Walla, from jail, and the withdrawal of all police investigations launched into his journalistic work.”

Fahad Shah was arrested on February 4 at the Pulwama police station after summoning him for questioning. The first information report (FIR) states that he is under investigation under draconian law, Unlawful Activities (Prevention) Act for alleged sedition over his social media posts and unlawful activities.

During his interrogation at the police station, Shah was questioned about The Kashmir Walla’s coverage of a cordon and search operation by Indian troops. Drawing his attention to the reputation Shah commanded in South Asia and around the world as a journalist of high integrity, the statement impressed upon Manoj Sinha on the need to release him.

As regards Shah’s professional acumen, they say, “His writing for The Nation magazine was recognised at the 2021 Human Rights Press Awards. His reporting on events in Jammu and Kashmir is a public service, not a crime, and should be protected under Indian law.”

The groups maintain that press freedom and rights groups have documented numerous incidents of detentions and threats to journalists in IIOJK since the abrogation of the special of the territory in August 2019. “In view of this,” they say, “the release of Fahad Shah and other arbitrarily detained journalists is a critical step to prevent further criminalisation of the profession in Jammu and Kashmir.”

The letter urges the Lieutenant Governor to see to it that “the authorities drop retaliatory investigations into all four journalists, unwarranted charges brought against them, and allow Kashmiri members of the press to work freely without facing detention, harassment, and other forms of government reprisal.”