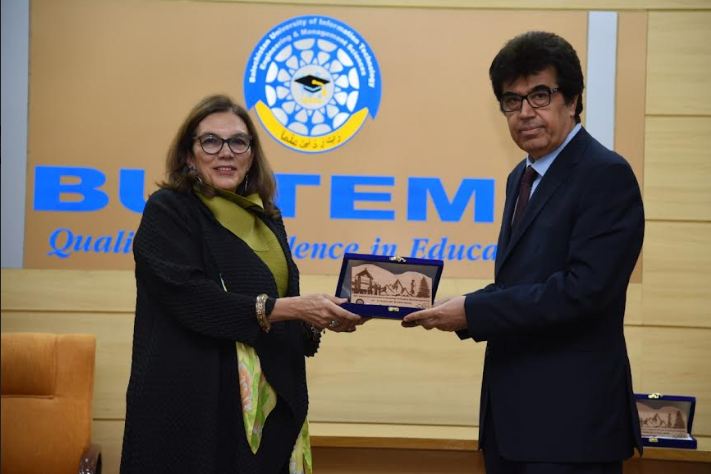 ISLAMABAD, OCT 26: /DNA/ – The Delegation of the European Union (EU) to Pakistan and Justice Project Pakistan (JPP) on Thursday hosted an event to commemorate the upcoming World Day Against the Death Penalty (October 10).

At the event, Justice Project Pakistan launched their latest campaign, titled ‘This Is (Not) A Game’, highlighting systemic issues in the criminal justice system, with a particular focus on the struggles of women who have to engage with the system and the difficulties they face in terms of access to justice.

The Chief Guest at the event was Mr. Riaz Fatyana, member of the National Assembly and Chairman of the National Assembly’s Standing Committee on Law and Justice. The keynote address was delivered by award-winning filmmaker and actor, Sarmad Khoosat. The event was attended by Ambassadors of EU Member States, UN representatives, members of civil society organizations and parliamentarians.

The Ambassador of the European Union to Pakistan, Androulla Kaminara, in her welcome address recognised the fact that Pakistan has carried out no executions for the past 22 months, as well as the landmark decision of the Supreme Court prohibiting the execution of prisoners who are severely mentally ill.

She reminded that Pakistan has signed the UN International Covenant on Civil and Political Rights (ICCPR) in 2010 – well before the existence on GSP+ – and the ICCPR calls for the death penalty only to be applied to the “most serious crimes”. However, Pakistan currently has 33 crimes that can lead to a death penalty.

She added, “This year’s global theme is ‘women and the death penalty’ which focuses on inequalities within the justice system and how this disproportionately affects women as they engage with courts and law enforcement authorities. This makes access to justice much more difficult for women. While working towards the complete abolition of the death penalty worldwide for all crimes and genders, it is crucial to sound the alarm on the discrimination women face and the consequences it can have on a death sentence.”

The components of the ‘This Is (Not) A Game’ campaign include a digital game, an ongoing interactive street theatre performed in Lahore, Multan, Faisalabad and Karachi with Azad Theatre, an Augmented Reality (AR) Instagram filter, an interactive radio show with Afzal Sahir, and an ongoing two-week internship programme featuring 60 students from 22 universities across Pakistan. “Although Pakistan sentences very few women to death, the justice system disproportionately affects women who have to engage with the system in one way or another, whether it is visiting a police station to file a complaint or to attend court hearings,” said Sarah Belal, the founder and executive director of JPP. “We hope that the campaign, ‘This Is (Not) A Game’, will play an important role in bringing the systemic issues in the criminal justice system to the forefront of people’s minds and will remind everyone that justice and the death penalty are not synonymous,” she added.

Since the de-facto moratorium on the death penalty was lifted in 2014, the country has executed 516 individuals. Pakistan also has almost 4,000 individuals on death row – around 15% of the world’s death row population.