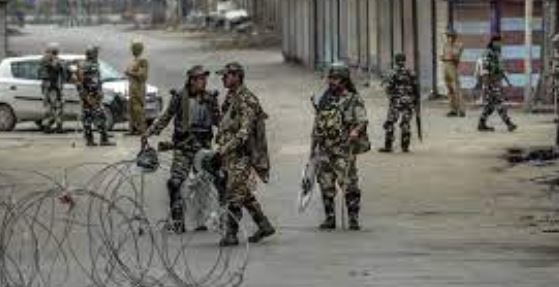 WASHINGTON, NOV 05 (DNA) – Speakers at a special event organized by the Pakistan Embassy in Washington to mark the ‘Kashmir Black Day’ reaffirmed their solidarity with the Kashmiri people and called on India to end its gross human rights violations in occupied Jammu and Kashmir.

A Special documentary featuring the context of the Kashmir Black Day, Indian illegal actions of August 05, 2019 and human rights abuses by Indian occupation forces was also screened. In his opening remarks Ambassador Asad Khan thanked the audience for participating in the event to express solidarity with Kashmiri brothers and sisters suffering under Indian occupation.

He reiterated Pakistan’s continued moral, political and diplomatic support to the Kashmiri people in their struggle for right to self-determination against the worst form of repression unleashed by the Indian security forces for several decades.

The ambassador specially lauded the role played by the Pakistani and Kashmiri American community in highlighting India’s human rights violations in occupied Kashmir.  Senator Mushahid Hussain Syed expressed Pakistan’s unflinching support for the just struggle of the Kashmiri people for their inalienable right to self-determination as envisaged in the UN Security Council Resolutions.

He emphasized that Pakistan would avail every possible political, diplomatic and legal option to achieve this objective. Senator Mushahid Hussain Syed also drew the world’s attention to the grave threat to peace and security posed by Indian actions and called for the international community, particularly the US, to ask India to end its human rights violations in Kashmir and take measures to reduce tensions in the region.

The senator also said that despite political differences, all political parties in Pakistan stand together on issues like Kashmir, Palestine, nuclear programme and the China-Pakistan Economic Corridor (CPEC).

WKAF Secretary General and prominent Kashmiri leader, Ghulam Nabi Fai, posed the question: How long will the world powers watch in silence as India carries out the genocide in Kashmir?.

This is a question the Kashmiris are asking too, he said, adding that world powers should persuade India to stop the killings; end repression; revoke Domicile Law which is designed to change the demography of Jammu and Kashmir; and fulfill their promise to Kashmiri exercise so that a new era of good will, peace & prosperity can dawn into Subcontinent.

Meanwhile, Fai urged the United Nations to establish the necessary conditions for the holding of a free and impartial plebiscite in Jammu & Kashmir.

The Biden Administration, he said, must take a principled and practical stand on the Kashmir issue and affirm its support for Kashmiris’ human rights and resolve the root cause of the India-Pakistan crisis — the continued denial of the Kashmir people’s right to self-determination, added.

Ironically, he said, by slamming the door shut on the international community, India may have overreached itself diplomatically. “In trying to make Pakistan irrelevant to Kashmir, India has made it even more relevant,” Ambassador Toquir Hussain said.

Dr. Imtiaz Khan, Professor at George Washington University Medical Center, said that denial of right to self-determination has resulted in the suffering of the people of Kashmir. The unresolved Kashmir dispute posed an imminent threat to the security of the region, he said.

Dr. Khan gave detailed account of the numerous massacres in Kashmir, including Chattisingpora, Beijbehara, Mashali Mohala, Sopore, Hnadwara, Gawkadal. He also reminded the audience about Kunan-Poshpora when Indian army gang raped over 100 innocent women, between the ages of 10 to 70.

Justice is yet to be delivered, despite the lapse of 30 long years, he pointed out. And world powers do not realize that the deadly cost of their silence and inaction in this regard.

Colonel (R) Wesley Martin, an Iraqi war veteran, highlighted the human rights abuses being committed by the Indian army in Kashmir. He said that the United States intervention could bring about halt to the atrocities if it takes a firm stand against India’s illegal actions in Kashmir, particularly since August 5, 2019.

India’s claim that Kashmir is its internal matter has been rejected by the United Nations which stands for the Kashmir conflict to be resolved under UN Charter and the applicable UN Security Council resolutions, he said. Among those present were: Saleem Qadri, Sardar Zarif Khan and Shoaib Irshad. = DNA

« Pakistan to buy LNG at $30.65/mmbtu in November (Previous News)
(Next News) Fawad blames Sindh govt for hike in sugar and flour prices »