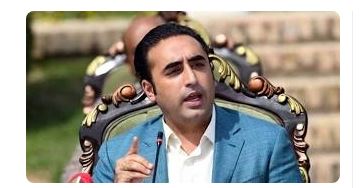 Islamabad, APR 3: /DNA/ – Chairman Bilawal Bhutto Zardari in conversation with a private television channel has said that the PM, Speaker, Deputy Speaker, President and anybody involved in this act today have committed high treason.

We are recording our protest in the Parliament. We have demanded of the Supreme Court of Pakistan and all those institutions responsible for the protection and implementation of the constitution to do so and accept our no-confidence that is legal.

It was their own decision to have Ayaz Sadiq on the panel of the Chair. Following the policy of the House, Ayaz Sadiq has chaired the session of the National Assembly. When the Speaker is not present, neither is the deputy Speaker, it is the responsibility of the one nominated on the panel to conduct the session. The vote of no-confidence took place and we secured 195 votes.

We hope that our judiciary will not let any unconstitutional act take place.

Responding to the questions of the panelists, Chairman PPP said that when such a grave attack has been made on the constitution, we expect for the Supreme Court to correct it.

The PM has committed treason to run from the no-confidence. We have proved that the majority is with us. We will not let Pakistan be run on the rule of the jungle.

The PM and Speaker are not even aware of how grave the act they have committed is.

Raza Rabbani, Farooq Naek, Nayyer Hussain Bukhari along with others are preparing a petition.

The opposition is ready for elections. It is not possible for the Supreme Court to not stand with us. It is bound to stand with and defend the constitution.

We submitted a no-confidence motion against the Speaker too after which he cannot even prorogue the session.

Our position now is that the no-confidence has been completed and Imran Khan has ceased to be the prime minister of Pakistan.

Imran Khan is trying to become a carbon copy of Shaheed Zulfikar Ali Bhutto. It is ridiculous. Shaheed Zulfikar Ali Bhutto never abrogated the constitution. We were the ones who drafted it. He did not abrogate the constitution even to save his life. He said that he would not expose national secrets even if it meant that he would lose his life. This is nationalism and patriotism.

Imran Khan will be dealt with according to Article 6.

The united opposition’s numbers are complete not only for the no-confidence to succeed but also for the PM.

The reality is that Imran Khan has lost, according to the constitution and democracy.

Do the Pakstani people want for things to take place according to the constitution or a person’s ego? Pakistan has become a banana republic before the world today. We will not let Imran succeed in this conspiracy.

It is Imran’s disillusion just like that of Musharraf that he would succeed after creating a law and order situation. Justice Waqar Seth clearly wrote in his order what the punishment of traitors is.

The President tried to abrogate the constitution today.

As far as the foreign conspiracy is concerned, all are witness to how our efforts have always been to remove this undemocratic man. Long before the PM went to Russia, me and my father went to Shehbaz Sharif to form consensus. Even before that, we had our CEC meeting where it was decided to proceed with the long march and no-confidence.

Even before that, in September 2020 when we were laying the foundation of the PDM, no-confidence was one of the points.

Are we psychic? Would we have known in September 2020 that there would be a conflict in Ukraine? Had this conspiracy claim been true, why did he wait till the last minute to reveal it? He should have demarched that diplomat on the very same day.

This is not a game of cricket. The Parliament is the supreme institution.

What happened in the Parliament today cannot be forgiven.

There is no space for the Supreme Court to not support us.

We salute the Supreme Court for showing a responsible attitude even on a Sunday. We have hopes associated with it.

The constitution has been abrogated and there has also been a 100% contempt of court today.