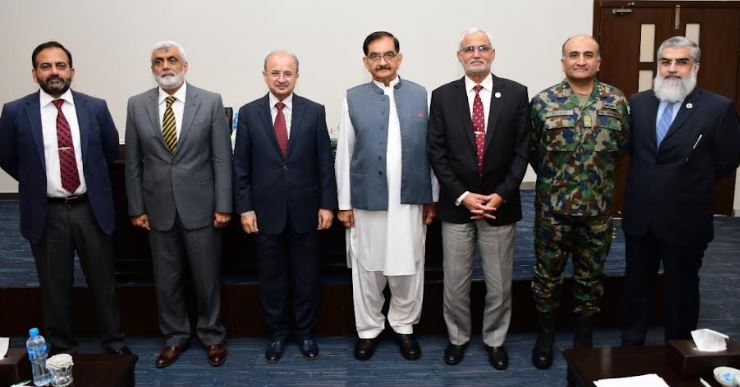 ISLAMABAD, SEP 23: ‘Air Power has virtually become an instrument of choice in the hands of political as well as military commanders for achieving their politico-military objectives alone as well as in synergy with other instruments of military application.’

This was the key message of the seminar on ‘Significance of Airpower in Future Indo-Pak Conflict’ organised by the Centre for Aerospace & Security Studies (CASS) in Islamabad.

Discussing the employment of airpower in the subcontinent from a strategic perspective, Air Vice Marshal Nasser ul Haq Wyne highlighted the importance of airpower and stressed the need for developing ‘air mindedness’ amongst all segments of society, especially within the political and military leadership. Going over the history of Indo-Pak air engagements, he outlined how air power had contributed to either deter war, or to meet national objectives in wartime as well during peace; and opined that the new conflict scenario could be termed as ‘Air Cold Start.’ He concluded that although PAF’s response in all the conflicts had remained exceedingly well, yet, there was a need to adopt a wholesome approach towards any future conflict/war, which would not be possible without a politically stable Pakistan; steady economy; and professional defence forces, including an Air Force second to none.

On the subject of ‘Evolving Geostrategic Environment and Induction of New Technologies: Impact on Airpower Balance in South Asia,’ Air Vice Marshal Faaiz Amir emphasised that change in the world order would not be a simple change of leadership, rather it would mean a deep, significant, and critical transformation of the entire world system. Such a transition to a new balance of power would mean turbulence and conflict. Sharing examples from history, he opined that reconfiguring of power balance often occurred in the least stable regions. ‘Pakistan will have to take measure to not only ensure its sovereignty but also bring prosperity to its downtrodden populace,’ he said. AVM Amir cautioned that the need to watch conflict drivers in the region had never been greater.

Speaking on the employment of airpower in Indo-Pakistan context, Air Marshal Farooq Habib (Retd), highlighted that existing Full Spectrum Deterrence, had successfully foreclosed options of full-scale wars as well as limited conflicts between India and Pakistan. Even the Cold Start Doctrine, which India had crafted after 2001-02 stand-off, was redundant in the wake of Pakistan’s conventional and nuclear deterrence regimes. He further elaborated that India had thus, resorted to hybrid war against Pakistan at sub conventional level. Within this context, at times India could opt for an aerial strike to draw political mileage domestically. In such cases Pakistan Air Force, he  said, was fully geared up to respond with impunity through a quid pro quo plus approach, as shown amply in February 2019.

While delivering the Concluding Remarks, Air Marshal Farhat Hussain Khan (Retd),             thanked the speakers for their in-depth analysis. He agreed that air power, being technology intensive, had evolved at an exponential speed vis-a-vis other instruments of military power. Air Marshal Khan highlighted that induction of force multipliers in 21st Century had helped both operators and air planners, plan higher duration missions, enabled them with better situation awareness, enhanced combat effectiveness without adding to the fleet size. This has allowed greater economy, he shared. He further pointed out that non-kinetic means of warfare and induction of emerging technologies like AI, cyber, space, and quantum computing in South Asia, were bound to evolve the nature of air war in terms its duration, severity, surprise, and lethality. ‘Therefore, future Indo-Pak war, if any, with air power alone is likely to be fast, destructive and of short duration.’ He recommended that Pakistan needed to formulate a comprehensive indigenisation strategy to develop its own technologies in avionics, weapons and more so in non-kinetic means of warfare. Mastering the developed technologies, knowledge-based trainings, research and development to get best quality human resource, is the need of the hour, he stressed.