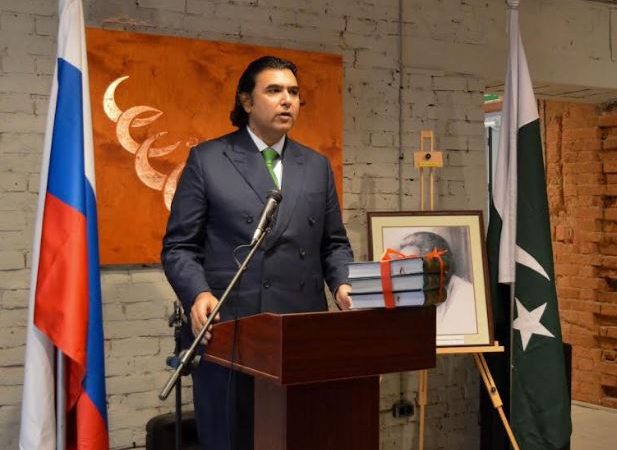 MOSCOW, SEP 26 /DNA/ – “Iqbal beats in the hearts of all Pakistanis,” said Pakistani Ambassador to Russia, Shafqat Ali Khan, in his opening remarks at a ceremony to present an Encyclopedia of Iqbal held at the Eastern Cultural Centre, Institute of Oriental Studies under the Russian Academy of Sciences today, on 26 September 2022. Ambassador further stated that “humanism, passion for justice, striving for a new world based on justice and fairness makes Iqbal a part of the collective ownership of the entire humanity.”

The three-volume Encyclopedia in Urdu language was presented by Senator Walid Iqbal, Chairman of the Senate Standing Committee on Human Rights, who is also a grandson of the great poet. The Senator recalled that one of the dreams of Muhammad Iqbal was the Asian renaissance that can be achieved through the Islamic concept of the oneness of God or Tawhid, which was viewed by him as human solidarity, human equality and human freedom.

Senator Anwaar-ul-Haq Kakar argued that the future generations would be benefiting from the heritage of Iqbal, as his poetry is not based on geography or any single language, be it Urdu or Persian, as the language was just a medium for him. the purpose of Iqbal’s’ poetry is unification of the human race not in a classical way of having monotonous economy or political system, but in terms of creating a modus vivendi where all live in a difference of opinions but still coexist in a peaceful manner.

Dr Lyudmila Vasilyeva, specialist on Urdu poetry, briefed about the history of studies of Allama Iqbal in Russia and assured that the Encyclopedia of Iqbal would be translated into Russian language and find attentive audience.

The ceremony was also attended by scholars from the Institute of Oriental Studies under the Academy of Sciences and other prominent institutions and thin-tanks, as well as Pakistani diplomats.