PTI to stage biggest protest ever against govt: Imran Khan 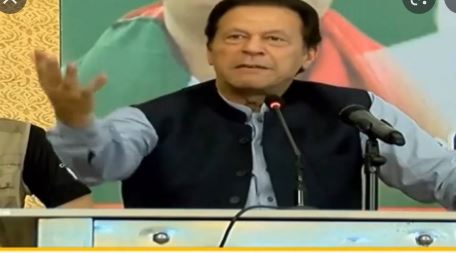 ISLAMABAD, Jun 14 (DNA): Pakistan Tehreek e Insaf (PTI) Chairman and
ousted premier Imran Khan Tuesday said his party will stage the biggest
protest in the history of the country against the coalition government.

Addressing a gathering from Khyber Pakhtunkhwa House in Islamabad, Imran
Khan said that during the peak of Covid-19, the entire world had imposed
the lockdown, adding that the world had believed that with the help of
lockdown the virus could be contained.
Imran said Pakistan during Covid-19 had not only saved the country’s
economy but also its labourers.

He added the opposition of that time pressurized him to impose a
lockdown countrywide, adding that the opposition never answered about
what would happen to underprivileged people as a result of a complete
lockdown nationwide.

Imran Khan said that the people in China were provided with food, when
the lockdown imposed in the country.

Imran Khan said: “We had given money to the industries, so that they
could not be shutdown”.

Imran said that for not imposing lockdown, the opposition was in the
view that FIR should be registered against him (Imran), adding that
wherever in the country his party was in power, there was the facility
of the health card for the masses.

Through the Kamayab Jawan and Kamyab Pakistan initiatives, the interest
free loans were given to the youth, the former premier said.

Imran Khan said today all the ‘thieves’ are united, adding that the
United States has imposed these leaders on the country.

Imran went on to say that the US could control these rulers, because
they have kept their money abroad, adding that for 30 years, merely two
families have ruled the country.

Imran said: “We were purchasing 30 per cent cheaper oil from Russia,
adding that his government had also faced pressure from International
Monetary Fund (IMF), but they did not exerted pressure on the masses.

The prices of ghee, flour, sugar and rice have been increased by the
government, adding that the March was staged against PTI government.

Imran went on to say that within two months of their rule, inflation
witnessed whooping hike, as compared to PTI’s government tenure of three
and half years.

The PTI Chairman said that Raja Riaz being the Leader of the Opposition
in National Assembly which means the parliament has ended, adding that
Raja Riaz is ‘Lota’ who will contest the elections on the ticket of
Pakistan Muslim League-Nawaz (PML-N).

Imran Khan took a dig at the government and said these people are not
worried for the masses, but for US, adding that the corrupt peoples have
been giving chances in bureaucracy.

The former premier claimed the messages are being send to the media
houses for not providing coverage to PTI.

Imran Khan claimed the government is putting up all its efforts to
destroy the Election Commission, adding that they will resort to the
tactics of rigging in next elections.

He urged the people to come out for peaceful protest on his call as the
government is unable to run the country.

He said the PTI government never stopped the long march of the
opposition parties unlike the incumbent government which has framed PTI
officials in fake cases.

Meanwhile, talking to a private television channel, the former prime
minister said he will intensify his movement against the political
opponents. ‘Will politically fight against opponents at every forum’, he
was quoted as saying.

“We will continue our political movement under the boundaries of the
land of the law,” Imran Khan said.

Responding to a question, Imran Khan said he will not accept any
‘lollipop’ and demanded an immediate announcement of general elections
in the country.

Sources privy to the development said, the ousted prime minister again
expressed his reservations on the ECP and reportedly warned the Election
Commission of Pakistan to refrain from becoming a ‘wing’ of a political
party.