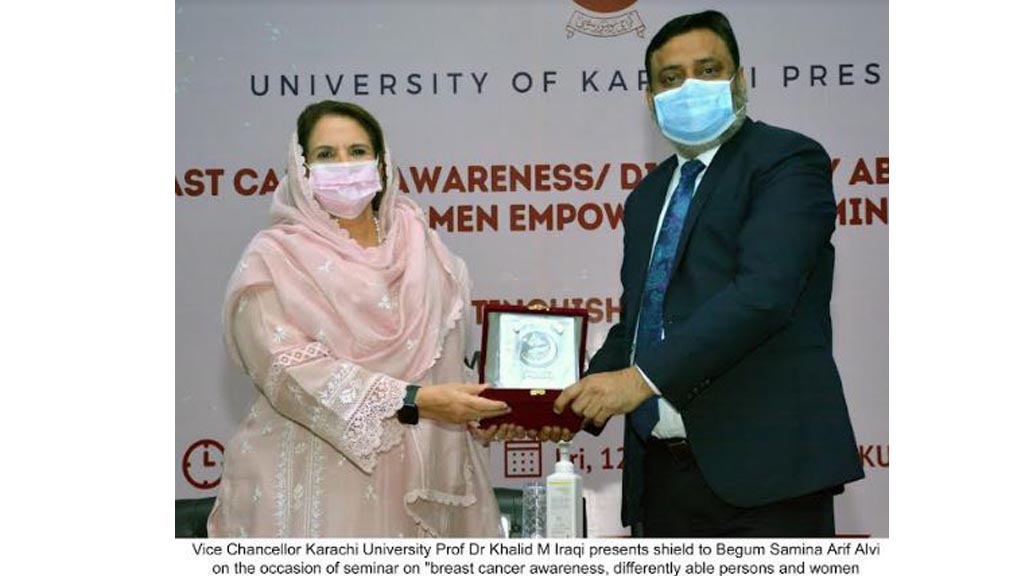 Karachi Nov 12 – First Lady Begum Samina Arif Alvi, wife of President Dr Arif Alvi, on Friday emphasized that with a fifty percent female population, there was a need to shun the taboos affiliated with breast cancer to encourage women to seek timely medical consultation. Addressing the “Breast Cancer Awareness, Differently Abled Persons and Women Empowerment Seminar” organized here by University of Karachi; she added that one in every eight women in the country is at the risk of breast cancer, besides one woman falling victim to the disease every 13 minutes. Expressing concern over the 40,000 deaths due to breast cancer every year, she told that it was the time for the women to realise the gravity of the situation and be concerned about their health.

She informed that a healthy lifestyle, balanced diet, and physical exercise could improve the health of women and could also contribute to minimizing the chances of a fatal disease. She stressed upon men to extend support to women in their families suffering from breast cancer or in need of medical advice. A healthy and empowered woman could bring about a positive change in society, she reiterated. She asked that the women and Differently Abled Person should get benefits from the business loans offered by the government and the State Bank of Pakistan. Begum Samina Arif Alvi thanked the media for supporting the cause as the breast cancer issue was being given the space in broadcast and publications besides running of the public service messages. She apprised that provincial governments were also being approached for the cause. She mentioned that the work of compiling the data of infected patients of breast cancer would also commence. She mentioned the immense support rendered by civil and military departments, welfare organizations, media and educational institutions in this regard. She said though October was marked across the country as breast cancer awareness month but the message needed to be spread persistently throughout the year. She called upon the students of University to spread the awareness message to other women around them. On the occasion, Vice Chancellor University of Karachi, Professor Dr. Khalid M. Iraqi also spoke and urged the students to spread the awareness message among other students.