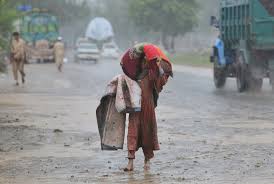 KARACHI: At least four people were killed in rain related incidents in the city.

Meanwhile five people including women were killed in Tharparkar when a lightning bolt struck them.

The first series of monsoon rains in Karachi started on Tuesday afternoon, with many areas receiving light and heavy rain cooling down a recent spell of hot and humid weather in the city.

The Met Office has also forecast heavy rain on Wednesday and Thursday.

Many parts of the port city plunged into darkness with the first drops of rain.

According to K-Electric, the city’s sole power supplier, more than 150 of 1400 electricity feeders in Karachi tripped as soon as the rainfall began.

A K-Electric spokesman said their personnel were busy trying to restore power to the affected areas as soon as possible.

According to DG Met Office, the intermittent rain will continue in the city till Wednesday.. Earlier pre-monsoon rains had slashed several parts of the country.

The city was expecting a sigh of relief after scorching temperatures since the last three days. The mercury shot to 40 degrees which severely affecting the lives of citizens in the city

« Istanbul Ataturk airport attack: Deaths rise to 41 (Previous News)
(Next News) Most wanted terrorists in Karachi on the run »