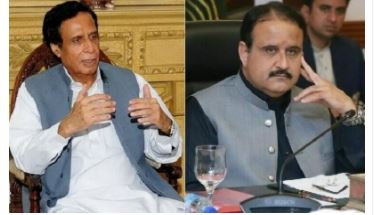 In a message on Twitter, the prime minister’s aide on political communication, Shahbaz Gill, made the announcement. Later, Minister of State for Information and Broadcasting Farrukh Habib confirmed that Buzdar had presented his resignation to the prime minister. Habib further said that PML-Q had decided to support the government in the no-confidence resolution submitted against PM Imran by the joint opposition.

Shortly before Gill’s announcement, Information Minister Fawad Chaudhry hinted that a “big change” in the Punjab government was in the offing, saying “it is obvious that the decision for a change in the [provincial] government has to be taken [now]”.

His comments came after the opposition submitted a no-confidence motion against incumbent Punjab Chief Minister Usman Buzdar in the Punjab Assembly today.

Chaudhry made the remarks during an informal talk.

“Many big changes are about to take place,” said the minister.

Chaudhry said details of the “big decisions” would be divulged very soon.

Earlier today, a delegation of senior lawmakers submitted the no-trust motion against Buzdar with Punjab Assembly Secretary Muhammad Khan Bhatti. The secretary confirmed that the motion had been submitted, adding that it would be presented to the assembly speaker according to the rules and regulations.

“Speaker Chaudhry Parvez Elahi will take action on the no-confidence motion and requisition [notice] in accordance with the Constitution and the law,” he said.

An official handout issued by the provincial assembly stated that 127 lawmakers had signed the no-trust motion against Buzdar while 120 had signed the requisition notice.

“As per the Constitution, the signatures of 74 members are required to requisition the provincial assembly session,” Mashhood said in a video, adding that Buzdar can’t dissolve the assembly once the no-trust move is submitted.