Prices of cattle increase in twin-cities as Eid nears 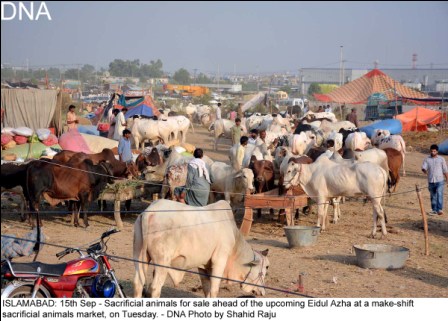 RAWALPINDI, 04 SEP, (DNA) – Risen prices of all sacrificial animals weeks before Eid ul Azha have kept the buyers at bay.

With Eidul Azha approaching, the prices of sacrificial animals have almost doubled as compared to normal days.

The price-hike has dampened people’s enthusiasm for Eid celebrations. Usually a month before Eidul Azha, the traditional business of sacrificial animals begins but the upward push in prices has disappointed the middle and lower-middle class.

There are less number of animals brought to the city from various parts of the country, especially from remote areas, but their prices are high.

Traders say since prices of fodder had gone high, they are forced to sell their animals at high prices. “How can we afford  to sell our animals at a low cost when we spend heavily to  feed them,” a trader said.

“Till few years ago, I sacrificed a goat regularly on every Eid ul Azha but this year it is out of my reach,” said a shopkeeper.

Another government employee said, “Buying a sacrificial animal is a dream now.” This year, the trend of joint sacrifice is increasing due to high prices of animals.

This year, the city district government has set up seven animal markets in Potohar Town. To avoid traffic rush and keep the provincial metropolis clean, the temporary markets have been set up outside the city.

At some markets, there are only goats and sheep while at others, cows can also be seen. Only a small number of camels are seen in the animal markets. =DNA