President calls for sensitizing nation about careful use of water 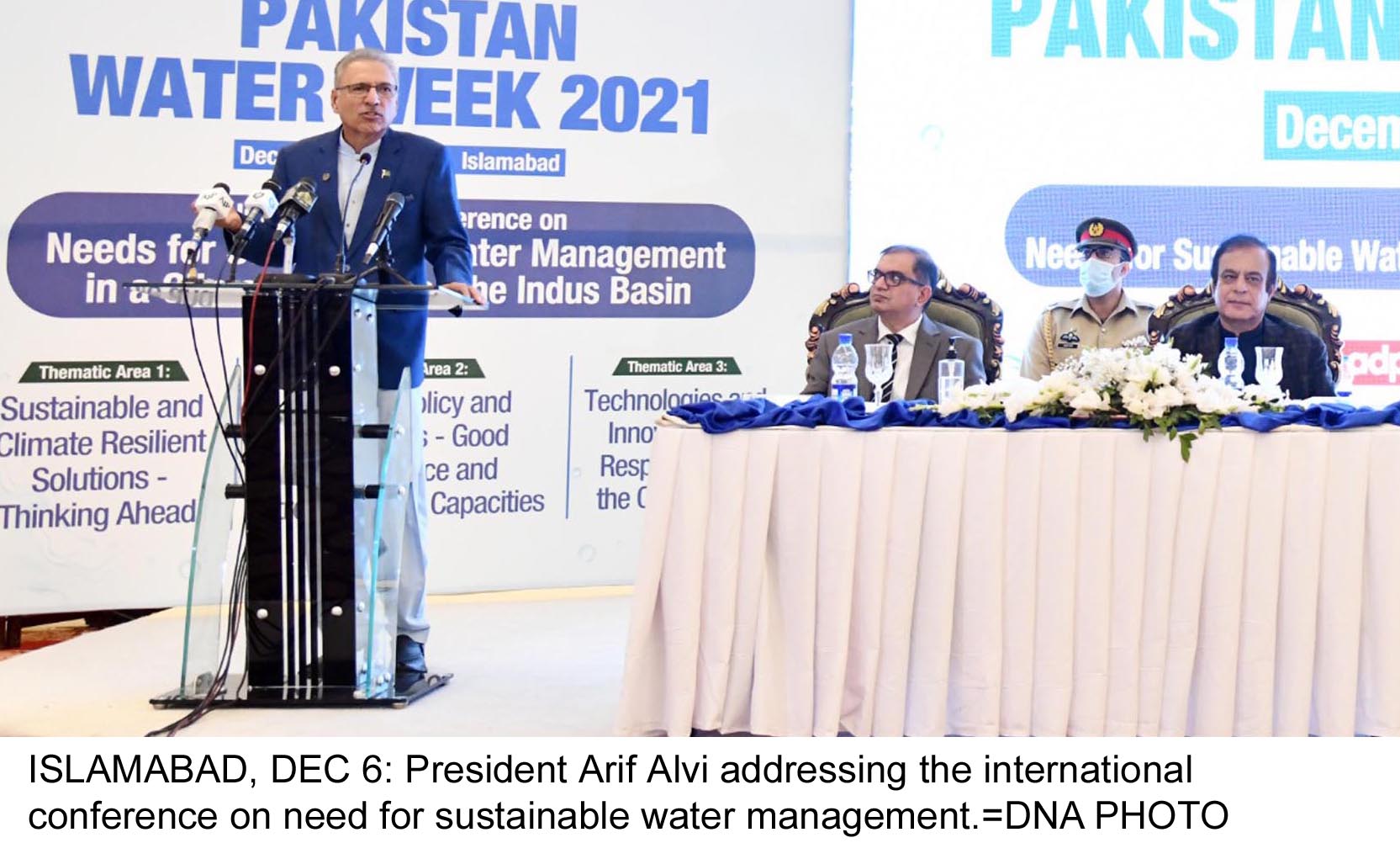 ISLAMABAD, DEC 06 (DNA) – President Dr Arif Alvi says the nation should be sensitized about better and careful use of water in the country as Pakistan is among the countries facing severe water crisis.

Addressing at the international conference in connection with Pakistan Water Week Monday, the President said Pakistan’s increasing vulnerability to climate change required urgent action on the management of water resources and for an improved system of water conservation at national and local levels.

The president said it was the responsibility of both the government and citizens to save water through resilient and sustainable solutions.

The conference themed ‘Needs for sustainable water management in a climate crisis for the Indus Basin’ was organized by the Ministry of Science and Technology through the Pakistan Council of Research in Water Resources (PCRWR), International Water Management Institute (IWMI), and CGIAR’s Water, Land and Ecosystems Program.

The event brought together academics, government officials, and policy experts to discuss the serious threat of water scarcity in Pakistan by 2035 and to lay emphasis on the linkage between water and food security.

President Alvi said climate change was the key factor affecting the reliability of water resources across the globe and raising concerns about the future of water availability in countries including Pakistan.

He stressed simultaneous steps to address the issue of water management, such as the policy on water-pricing to inculcate a responsible approach among the masses to save the valuable commodity.

He emphasized the practices to reduce water consumption including drip irrigation instead of flood farming, water recycling, and reallocating water for more valuable uses.

Dr Alvi said for ages, water had been the lifeline of ancient civilizations, may it Mehrgardh, Harappa Mohenjodaro, presently in Pakistan that became extinct after the river changed its course.

Similarly, he said, today’s Indus Water Basin and the country’s large aquifer needed attention for the formation of a regulatory framework for groundwater use. He said the melting of glaciers due to global warming could lead to incidences of severe droughts and extensive floods in Pakistan.

He said some areas of Pakistan particularly Balochistan had already started facing increased water scarcity with a critical need for climate adaptation in the water sector.

Dr Alvi said the government had made solid progress in achieving key principles defined under the National Water Policy and called for an integrated approach among provinces for its complete implementation.

The president extended utmost support of his office to the policies aimed at ensuring improved water governance and sustainable groundwater management.

Federal Minister for Science and Technology Senator Shibli Faraz said water conservation and management was an issue of major concern for the government in view of the depletion of groundwater resources.

He said managing the vast resources of Himalayan glaciers and the country’s fourth-largest aquifer was a big challenge to restore the ecosystem for the benefit of people.

To improve water governance, he said, data sharing was important and mentioned that PCRWR and Capital Development Authority had signed a Memorandum of Understanding on artificial groundwater recharge, making Islamabad the first with such arrangement.

Simi Kamal, member IWMI board of governors said IWMI was providing assistance to the government of Pakistan through data analytics for making choices about agricultural water management, develop water solutions and policy development.

Director General IWMI Mark Smith said Pakistan was facing critical water challenges and expressed confidence that the event would catalyze dialogue on the urgency for water security in view of the diminishing water resources.

He suggested effective and coherent water governance from federal to community levels, guidance from data and digital information and experimenting diversity in water systems through nature-based solutions. = DNA