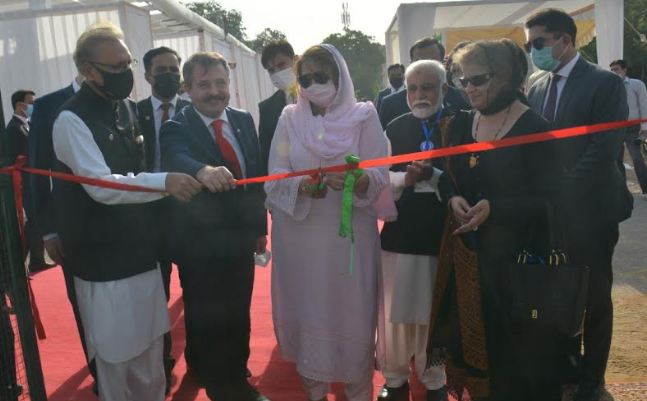 The event was attended by government , Turkish diplomats, civic leaders and members of the public.

This facility has been generously donated by TİKA-Turkish Cooperation and Coordination Agency which is the state-run donor agency of The Republic of Turkey working under the Turkish Ministry of Culture and Tourism. TİKA has established this bespoke Football Ground and Cricket Training Facility for the special children of Ida Rieu Schools as a gift from the Turkish nation.

On this occassion, Nadira Panjwani, President of the Ida Rieu Welfare Association thanked TIKA and its Karachi Programme Coordinator Mr Ibrahim Katirci and the Government of Turkey for this maagnificent expression of support for the cause of Special Children in Pakistan.

She said that Ida Rieu Schools had been serving the cause of education and human development of these children since 1922 making it a pioneer in this field.

Thousands of students with special educational needs have graduated from IRWA and have successfully integrated in the community and are contributing to advancement of society in their own unique way. She said that the Association will be celebrating its centennial year in 2022 and the occassion will be fully utilized to create greater awareness and undertanding in society about the needs of Special individuals.

Mr Ibrahim Katirci said that his organization has established a number of projects for the youth of Pakistan ranging from libraries to voccational training centers and music classrooms.

Today TIKA is proud to inaugurate yet another unique project in the shape of this customized sports facility for the Special students of Ida Rieu thereby providing them an opportunity to show case their sporting potential.

He also said that, TİKA has provided modern sports gear of international standard to IRWA students in order to promote equality of these children in mainstream sports.=DNA