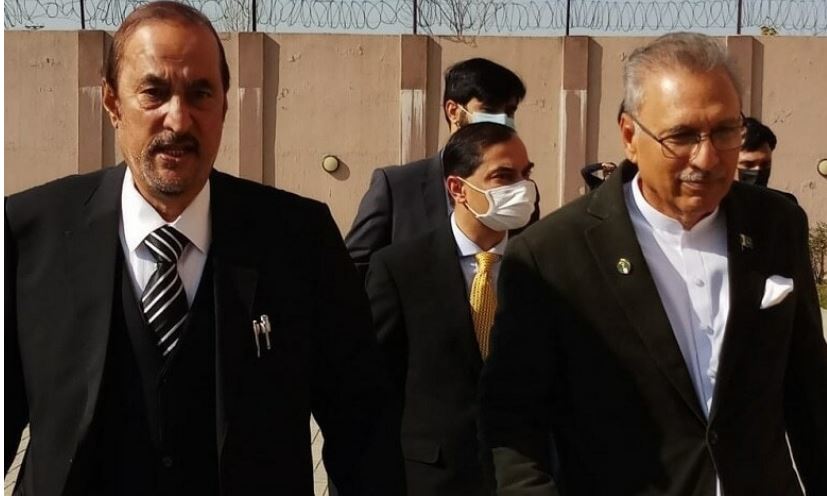 ISLAMABAD: President Arif Alvi made his first appearance before an anti-terrorism court in Islamabad on Friday in the 2014 Pakistan Television (PTV) and Parliament House attack case.

Alvi, who is nominated in the case, arrived at the ATC along with his counsel Babar Awan and filed an application to decline availing presidential immunity that he enjoys under Article 248 of the Constitution.

The hearing was conducted by ATC judge Muhammad Ali Warraich.

The president informed the court that he had the prerogative to avail immunity under the laws of Pakistan, “however, I choose to withdraw it as I believe there should no difference between anyone.”

“When I learned that the court is about to pen its verdict in the case, I decided to appear so there should be no talk that I did not appear,” he told the judge.

The president said he tried to learn more about immunity through studying Islamic history, saying it helped him understand that there was no room for immunity at all.

“All the caliphs appeared in courts with great dignity,” he said.

He appealed to the court to remove the backlog of cases and ensure quick dispensation of justice. “I also understand that there is a burden on the judiciary.”

He said his father had filed a case in 1977 which was still subjudice.

The court had reserved the verdict in the case last month, which will be announced on March 9.

Later, speaking to media outside the court, the president said he was bound to follow the country’s laws but insisted that he did not want to avail immunity in the case.

“I appeared before the court today as a common citizen and not as the president of Pakistan,” he said.

In August 2014, PTI and Pakistan Awami Tehrik had staged a sit-in in Islamabad which continued till December that year. The protest had continued for a record 104 days.

On Aug 31, 2014, PTI and Pakistan Awami Tehreek (PAT) workers marched towards the Parliament House and Prime Minister House and clashed with police deployed at Constitution Avenue. The protesters also attacked the premises of PTV and briefly took control of the building.

As per the prosecution, three people were killed and 26 others were injured while 60 individuals were arrested. The prosecution had submitted 65 photos, sticks, cutters and other objects to the court as evidence to establish its case.