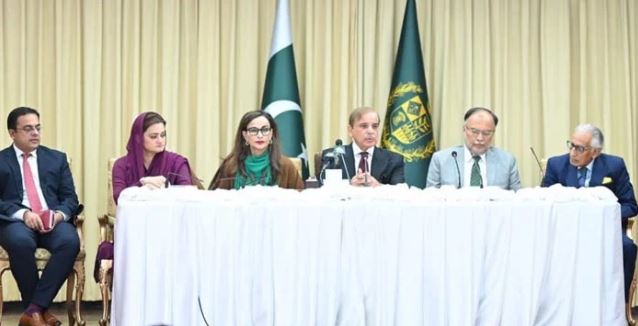 ISLAMABAD: Prime Minister Shehbaz Sharif on Tuesday said “audio leaks” had marred the country’s standing in the international community as no one would feel free to speak with the prime minister out of privacy concerns.

He said this while addressing a press conference at the Prime Minister’s House in the federal capital.

The younger Sharif said the “audio leaks” scandal was a critical matter and he was in the process of forming a high-level committee to probe into it.

“Who is going to visit the Pakistani prime minister from overseas now?” the PM questioned. “This scandal has put the prestige of a 220 million-strong nation at stake.”

Replying to a question, the PM dismissed allegations that PML-N Vice President Maryam Nawaz ever sought favour from him for the import of machinery for her son-in-law.

The prime minister said he fought Pakistan’s case with all his might at the United Nation’s 77th General Assembly and highlighted the plight of millions of flood victims before the world nations.

“I don’t think we have done anything to deserve the disaster of flooding that has displaced millions and so far claimed the lives of over 16,00 people,” the PM while talking to the press.

The PM added he had fruitful meetings with the world leaders, especially the heads of the state of China and Russia, who also pledged aid for Pakistan’s flood-hit population.

He said unlike the last government headed by the PTI, the coalition regime was going the extra mile to reconnect with the world, especially friendly countries.

‘We are now coming out of diplomatic backwater’

“The PTI government isolated Pakistan by estranging a number of close allies,” the PM said adding, “now we are coming out of that diplomatic backwater, thanks to the efforts of our Foreign Minister Bilawal Bhutto- Zardari, Sherry Rehman, and Maryam Aurangzeb”.

He said the former government pushed the economy to the brink of collapse because of its incompetence.

“Imran Khan-led government disgraced Pakistan before the world because of their ‘diplomacy of begging’,” he said.

The PM also alleged that Pakistan’s prestige and honour were jeopardised by the former rulers as — during their meetings with the global leaders — they used to carry themselves as though international delegations were beggars.

“I cannot repeat what the leaders of Pakistan’s friendly nations told me about the previous government, as they are state secrets. You’ll sweat if I tell what they said,” PM Shehbaz remarked, adding that they complained of the last government communicating in a disrespectful manner.

He added that this behaviour of the PTI government damaged Pakistan’s reputation, while also destroying the economy.

The premier said that he presented Pakistan’s strong position on Kashmir, Palestine, and Islamophobia. He added that the treatment of Muslims in India was also strongly condemned.

Commenting on the expenses incurred during his recent visits, PM Shehbaz said: “From being the chief minister to becoming the prime minister, I’ve paid all expenses from my own pocket.”

Talking about the UN’s support of Pakistan’s climate change crisis, the premier said that UN Secretary-General António Guterres has spoken for the people of Pakistan.

“We are preparing for the donor conference and will not delay it,” he said.