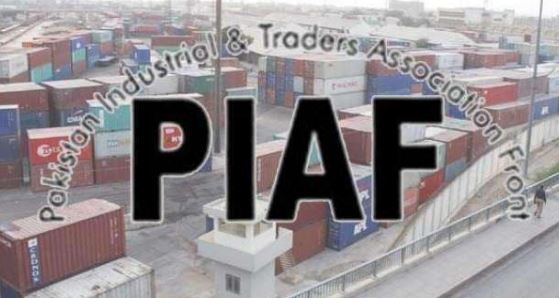 LAHORE, MAR 4 /DNA/ – The Pakistan Industrial and Traders Associations Front (PIAF), appreciating the Prime Minister’s package, said that the tax incentives would push industrialization in the country and strengthen efforts to support private capital investment in the manufacturing sector. PIAF appreciates the government for taking the business community onboard in the whole process and incorporating their all suggestions in the industrial package.

PIAF senior vice chairman Nasir Hameed and vice chairman Javed Siddiqi, observed that the package is aimed at bolstering investments in new companies, revive closed factories and help existing industrial units expand their production capacities and upgrade their technology. The incentives will be applicable on capital investments of Rs 50 million and above in small to large industrial units. All local, foreign and overseas Pakistani investors are eligible to benefit from the tax cuts and exemptions if they start production before the end of FY24 what is more important is that no questions will be asked about the source of funds invested in industrial projects, which was the major demand of the industry that was also accepted, leading to attract new investment of up to $5 billion in the country. Resident and non-resident Pakistanis willing to bring back their foreign disclosed and undisclosed assets to the country will get some additional tax benefits, he added.

Nasir Hameed said that the new amnesty scheme would boost exports and create new jobs, as tax relief would lead to substantial fresh local and foreign capital investment in the months ahead.

PIAF vice chairman Javed Siddiqi said that narrow and inadequate industrialization is one of the major reasons for Pakistan’s low exports and, consequently, the repeated currency crises that the economy has endured over the last several decades after brief periods of economic boom. He said that no country could advance economically, generate jobs and alleviate poverty without boosting and diversifying industrial productivity. He said that Pakistan has sought 12 bailout packages from the IMF in the last three decades to cope with its recurring balance-of-payment difficulties. The journey to diversified industrialization can be tough and long, and requires consistency in policies and perseverance, he said.

The country is facing many financial challenges including the current account deficit, balance of payments gap, swelling imports and foreign loans, however, with concerted efforts and right policies, the country will pass through the tough period, he said.

He said that enhancing manufacturing base was vital to achieve sustainable goals, as the government has introduced long-term policies primarily aimed at sustainable economic growth in the country and to achieve the economic targets.

Highlighting several other incentives announced by the government, he said they would usher the nation towards an industrial revolution, besides increasing export volume. He said that tax collection reached the record level of Rs6 trillion from Rs3.5 trillion, as the government was taking steps to reduce the tax burden on the public and widening the tax net.

He added that tax incentives, especially for those with documented funds, are important to attract investors. The government should also undertake legal, regulatory and energy reforms, and cut the bureaucratic red tape to make manufacturers and exporters competitive in international markets, he suggested, adding that Pakistan has grown its overseas sales in the last couple of years but its dependence on low-value-added textiles and lack of market diversification means that its imports have far outpaced its exports.