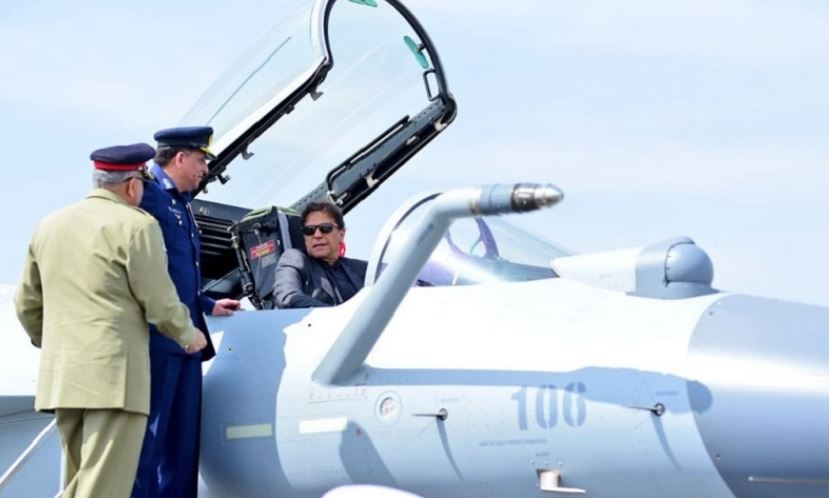 Kamra, MAR 11: The Pakistan Air Force (PAF) on Friday formally inducted modern J-10C fighter aircraft in its fleet during a ceremony at the Kamra Air Base.

According to state-run wire service APP, the J-10C is larger and can be equipped with a bigger active electronically scanned array (AESA) radar than the one used by the JF-17 Block 3. The aircraft can carry more advanced, fourth-generation air-to-air missiles including the short-range PL-10 and the beyond-visual-range PL-15. The military had in January confirmed the long-speculated deal with China for the supply of J-10C jets. It had said that the acquisition was being done in view of the regional security matrix that required Pakistan’s armed forces to continuously upgrade their capacity.

Many think the J-10C deal is Pakistan’s answer to Rafales bought by India from France.

Interior Minister Sheikh Rashid had told journalists in December that J-10C jets would participate in the March 23 parade.

Addressing the ceremony today, the prime minister thanked China for providing the jets to Pakistan in a “record time of eight months”.

“I am glad that our armed forces have a futuristic and forward-looking approach because technology is going to be a great tool for future warfare,” he added.

The premier said the country would spend more on its defence as its wealth increased with time.

The prime minister said the entire nation had the confidence that our armed forces were fully capable to defend the country. He recalled that Pakistan’s response in the wake of the Balakot intrusion sent a clear message to the world that the country was capable to defend itself.

He stressed that developing indigenous technology was the need of the hour, saying “Pakistan is working on it”.

PM Imran noted that Pakistanis were skilled in all modern fields, but they were based abroad. He then expressed the hoped that the country’s talent would soon be serving Pakistan. “We can build any institution of international quality and we are very much capable of it.”

Earlier, the prime minister was presented a guard of honour by a contingent of the PAF.

The prime minister witnessed a thrilling fly-past of various formations of aircraft, including the newly inducted J-10C, F-16s, JF-17s and Mirage that showcased an array of avionics and weaponry.

After the fly-past, the prime minister witnessed the landing of five J-10C aircraft.

The prime minister and the service chiefs were later asked to inspect the newly inducted fighter jet from the inside. The premier climbed up into the cockpit with the air chief and the COAS standing next to him as an officer gave them a briefing on the jet’s capabilities and functionality.