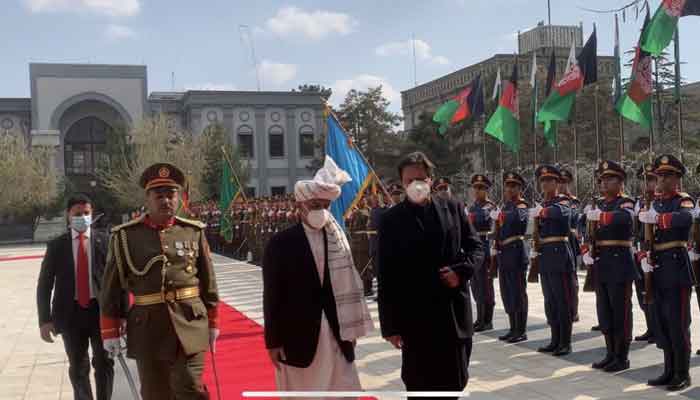 KABUL, (DNA) : Prime Minister Imran Khan on Thursday was given a warm reception at the Afghan Presidential Palace as he arrived in the neihbouring country on his maiden visit.

The Prime Minister reviewed the guard of honour presented by a contingent of Afghan forces.

President Ghani and Prime Minister Khan introduced each other with their respective delegations.

Later, the two leaders proceeded for a meeting to be followed by delegation-level talks.

Pakistan’s ambassador to Afghanistan Mansoor Ahmad Khan and the embassy officials were present.

On the invitation of Afghan President Ashraf Ghani, this is Prime Minister Imran Khan’s first visit to Afghanistan since he assumed office in 2018.

The focus of the talks between two leaders will be strengthening of bilateral relations, the Afghan peace process and regional economic development.

The Prime Minister’s visit is part of regular high-level exchanges between Pakistan and Afghanistan.