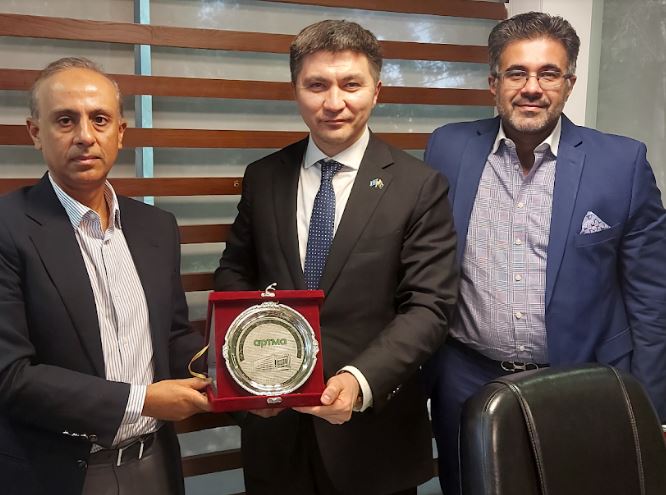 LAHORE, NOV 4 /DNA/ – Yerzhan Kistafin, Ambassador of Kazakhstan to Pakistan, has said that Pakistan and Kazakhstan are striving to enhance bilateral trade and cooperation in diverse sectors to achieve regional connectivity.

He made this point while addressing to the members of All Pakistan Textile Mills Association (APTMA) at APTMA House. Earlier, he was welcomed at APTMA House by Mr. Abdul Rahim Nasir, Chairman, Mr. Kamran Arshad, Sr. Vice Chairman and Mr. Raza Baqir Secretary General of the Association on his arrival to the Association’s office. The ambassador said both Pakistan and Kazakhstan enjoy exemplary diplomatic relations which now needs to reflect in the volume of bilateral trade and commercial ties. In the last session of Pak-Kazakh Inter Governmental Commission held last year, he said, it was agreed to foster trade and economic relations and three working groups were constituted on economic, energy and regional cooperation. He added that these groups will hold their sessions in the second and third week of the current month and invited APTMA to attend the meetings of these groups especially the economic group. He hoped that the Shanghai Cooperation Organization (SCO) summit held in Dushanbe last month would usher in wider regional cooperation in all areas, especially trade and commerce. Prime Minister of Pakistan and President of Kazakhstan had discussed in detail about the potential of people to people contact and economic cooperation. They had affirmed to strengthen the centuries old relations between the two nations by exploring all evinces, he recalled.

He stressed that both the countries need to focus on transport and logistics to increase the volume of trade and urged the need for cooperation between Customs Services to remove hiccups. Commencement of direct flights between Pakistan and Kazakhstan will add to enhance trade and business relations, he added.

The visiting envoy further hoped that the peace and stability in Afghanistan would not only increase trade between Pakistan and Kazakhstan but also contribute to the economic development of Afghanistan as regional transit hub between the Central and South Asia.

He was of the view that the current bilateral trade volume of $ 45 million was hugely low as compared with the real potential of bilateral trade. He said the alternate route of Karakorum Highway may also be explored for uplifting bilateral trade. However, he pointed out that the Karakorum route becomes inaccessible during harsh winter season but it can be safely used during the remaining part of the year.

The ambassador offered the possibilities of mutual cooperation in exploring rich hydro carbon reserves of Kazakhstan for the benefit of both the countries.

According to him, Pakistan is a promising market with its large population for the foreign investors, including the Kazakhs. The Kazakh investment in the textile sector of Pakistan would be duly considered because of the high quality and variety of Pakistan textile products, he added.

Speaking on the occasion, Abdul Rahim Nasir, Chairman APTMA highlighted the strengths and potential of textile industry of Pakistan. He informed that textile sector in Pakistan is on an upward trajectory with lofty export target of $ 21 Billion for the current year as against actual export of $ 15 Billion during the last year, new investment of $ 5 Billion in textile sector, addition of 100 new plants and creation of 500,000 extra jobs.

Rahim pointed out issues adversely affecting bilateral trade including logistic issues, obtaining and using Letters of Credit (LC) in trade with Kazakhstan, language barriers in labeling the goods in Kazakh or Russian language, difficulties in land rout due to security situation in Afghanistan and delay in signing of Preferential Trade Agreement (PTA).

He urged the need of strengthening of banking channels between Pakistan & Kazakhstan, an early signing of PTA, utilization of OIC, ECO, and SCO platforms for expansion of bilateral trade, joint investment in the textile industry and establishment of joint ventures, frequent exchange of trade delegations, synergies in bilateral trade expansion, mutual capacity building in textile sectors, and bilateral exchange of business delegations to identify trade and investment options as a way forward to solidify trade and investment relations between Pakistan and Kazakhstan.  He hoped that the business community of both the countries would benefit from TIR to cut cargo costs substantially.

Senior Vice Chairman, Kamran Arshad, speaking on the occasion thanked the ambassador for visiting APTMA and discussing various options for boosting bilateral trade and investment. He hoped that such interactions will create enabling environment for uplifting commercial and economic cooperation between Pakistan and Kazakhstan. He said that increase in bilateral trade demonstrates the potential of trade between the two brotherly countries.