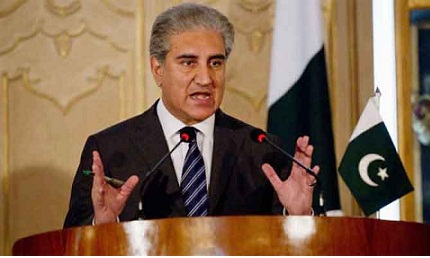 Islamabad : On the eve of a change in the US administration, Foreign Minister Shah Mehmood Qureshi has said that Pakistan cannot be ignored and strongly believes that no administration can ignore the country.

The foreign minister, while speaking to Geo Pakistan, said that a new world is being established out of which new priorities are coming forward. He added that Pakistan and the incoming US administration have a lot of “commonalties”.

“Challenges will be there. I’m not saying they won’t be there. We have to face the facts, but I believe Pakistan has a lot to offer,” said Qureshi, adding that Pakistan is an important country of the region.

“Pakistan cannot be ignored and I do think that that no administration will ignore Pakistan,” said Qureshi.

To a question about what Pakistan expects, Qureshi said the people being nominated by President-elect Joe Biden are those who know about Pakistan. He also shared that he had the opportunity to work with them when the Democrats were in power last.

The foreign minister told the hosts that Biden, during his time as a senator, was a “well-respected” member of the foreign relations committee.

“He has a very clear opinion about Pakistan and South Asia,” said Qureshi. He also mentioned that Pakistan and the US have a convergence of interest in Afghanistan.

“There are many areas where the Imran Khan government and Biden government have a common interest,” said Pakistan’s top diplomat. He shared the examples of climate change and the COVAX initiative.

Biden admin to help on Kashmir

The foreign minister, when asked about US-India ties, said that the incoming administration will help Pakistan in providing relief to the people in occupied Kashmir.

“There is one silver lining which is that this administration has a clear point of view on human rights,” said Qureshi while mentioning the “deteriorating” human rights situation in occupied Kashmir.

The foreign minister said that Pakistan is expecting the incoming administration to help Islamabad in “providing relief” to the Kashmiris from the military siege in occupied Kashmir.