No recognition of Israel, we are with Palestine in all circumstances: Pak officials 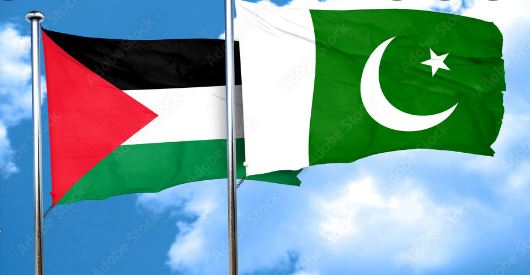 ISLAMABAD, Sep 24 (DNA): Pakistani Minister of Health Abdul Qadir Patel affirmed that his country will not recognize Israel, whatever the composition of his country’s government, and that Pakistan’s leadership and people are with Palestine in all cases.  That was during his excellency meeting in his office with Assistant Minister for IR of Palestine Imad  Al-Zuhairi and  Ambassador of the State of Palestine in Pakistan Ahmad Jawad Rabei.

Assistant Minister for IR of Palestine Al-Zuhairi briefed Minister Patel on the mission of the State of Palestine team for urgent intervention and response in the Deira Ismail Khan area and the work of the Palestinian International Cooperation Agency and its medical programs, and discussed with him the possibilities of future cooperation to achieve the benefit of the two brotherly countries and peoples. The Pakistani Minister of Health welcomed all forms of cooperation between the two countries and the exchange of  Experiences. During the meeting, he announced the provision of 10 additional scholarships to study medicine in Pakistan for Palestinian students, and stressed that Pakistan would spare no effort in supporting the State of Palestine and its brotherly people in all fields.

The palestunian Assistant Minister of foriegn Affairs H.E. Al-Zuhairi and the Ambassador of the State of Palestine to Pakistan also met at the headquarters of the Pakistani Ministry of Foreign Affairs with the First Undersecretary of the Ministry of Foreign Affairs, Jaweed Ahmed Omrani, in the presence of the Director General of the Middle East Department, and the official in charge of the Arab countries file in the ministry.  They presented a summary of the activities of the Palestinian Intervention and Urgent Response Team, which is supervised by the Palestinian International Cooperation Agency, which responded to the call and came to Pakistan to assist in relief efforts on the instructions of President Mahmoud Abbas as a gesture of loyalty and thanks from the Palestinian people to the brotherly state of Pakistan.  Leadership and as a tribute to this country, which stood by the Palestinian people in the most difficult circumstances and the most delicate stages that our Palestinian people have gone through.

The First Undersecretary of the Pakistani Ministry of Foreign Affairs reiterated his country’s refusal to recognize Israel and their principled position that supports and supports the rights of the Palestinian people, leading to freedom and independence, and their enjoyment of all their rights by establishing their independent, sovereign state with Al-Quds Al-Sharif as its capital.  As said by the pakistan’s founder Quaid e Azam Muhammad Ali Jinnah.

The meeting also discussed the possibility of dispatching a team of Palestinian engineers specialized in post-crisis issues to be alongside their counterparts from the Pakistani Crisis Management Authority in their efforts to find solutions for infrastructure in the areas that were destroyed after the floods that hit the country and left catastrophic effects.  Ways to enhance bilateral cooperation between the two countries in specific development fields, the most important of which is the agricultural field.