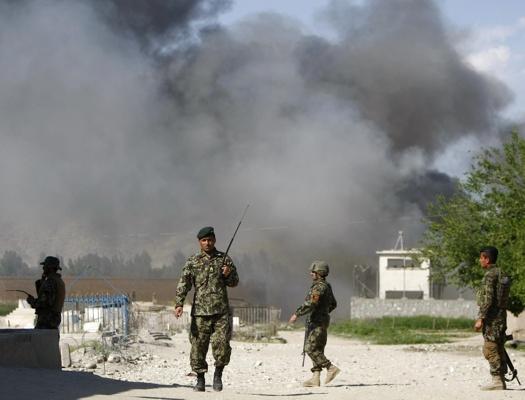 KABUL: Kabul has no plans to revive a peace process aimed at bringing the Taliban to the negotiating table after a four-nation effort earlier this year produced no results, the spokesman of the Afghan president said Thursday.

The group has met five times since January, in Kabul and Pakistan. The meetings did not include the Taliban, who have refused to join peace talks.

“There is no set time for another meeting of the group,” Chakhansuri told The Associated Press.

Afghanistan continues to suffer from “terrorist groups that operate from and have a support base in Pakistan”, Chakhansuri said.

A senior Pakistani security official familiar with the Afghan peace process echoed Chakhansuri’s statement. The official spoke to AP on condition of anonymity as he was not authorised to speak to the media.

“The peace talks between the Taliban and Kabul are not likely to be resumed soon,” he said, adding that “neither the Taliban nor Afghan government are interested in reviving” the talks.

Ghani took office in 2014 promising peace and began overtures to Islamabad aimed at ending the war.

Following a number of large-scale suicide attacks in Kabul, Ghani cut the dialogue with Pakistan, demanding Islamabad cease support for the Taliban and its close affiliate, the Haqqani network.

Ghani said Afghanistan’s regional initiatives with neighbours “are beginning to yield significant cooperative dividends. However, the exception is with Pakistan.”

He added that despite clear commitments to the quadrilateral peace process, “Pakistan’s dangerous distinction between good and bad terrorists is being maintained in practice.”

The Foreign Office had responded to Ghani’s remarks with ‘disappointment’.

“The need of the hour is close cooperation between Afghanistan and Pakistan rather than constant blame game by the Afghan government based on assumptions,.