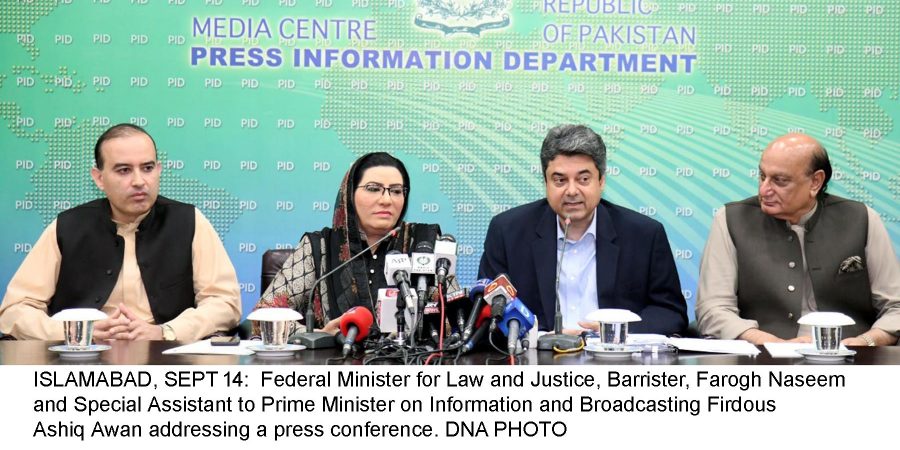 ISLAMABAD, SEPT 14 (DNA): Minister for Law and Justice Farogh Naseem has stated a number of new laws are being introduced to provide inexpensive and expeditious justice to the people and protect the vulnerable segments of the society.

He was addressing a news conference in Islamabad on Saturday. Special Assistant on Information Firdous Ashiq Awan and the provincial

law ministers of Khyber Pakhtunkhwa, Punjab and other were also present. The Law Minister said a Legal Aid and Justice Authority Bill is also being brought to provide legal, financial and other assistance and access to justice to the poor and vulnerable segments of the society in criminal cases.

He said disadvantaged women and children will be given preference by the Authority.

Farogh Naseem said the Enforcement of Women’s Property Bill will protect and secure the rights of ownership and possession of women in properties.

He said the women ombudsman to be appointed under this law will exercise enforcement and policing powers to restore the possession or ownership.

The Minister said the Letters of Administration and Succession Certificates Bill will authorize the NADRA to issue succession certificates within fifteen days.

Farogh Naseem said that a law is also being brought for the protection of whistleblowers.

Under this law, a Whistleblower Protection and Vigilance Commission will be established.

The Minister said that law is also being introduced to address the matters of overseas Pakistan regarding their immovable properties.

He said that these laws have been framed following the inputs by the Prime Minister and expressed the confidence it will also be replicated in the provinces.

Speaking on the occasion, the Special Assistant on Information said the new laws will bring about real change in the country under the vision of the Prime Minister.

She said the government is making efforts to bring the country out of obsolete system and all institutions are striving to give the Prime Minister’s roadmap a reality.