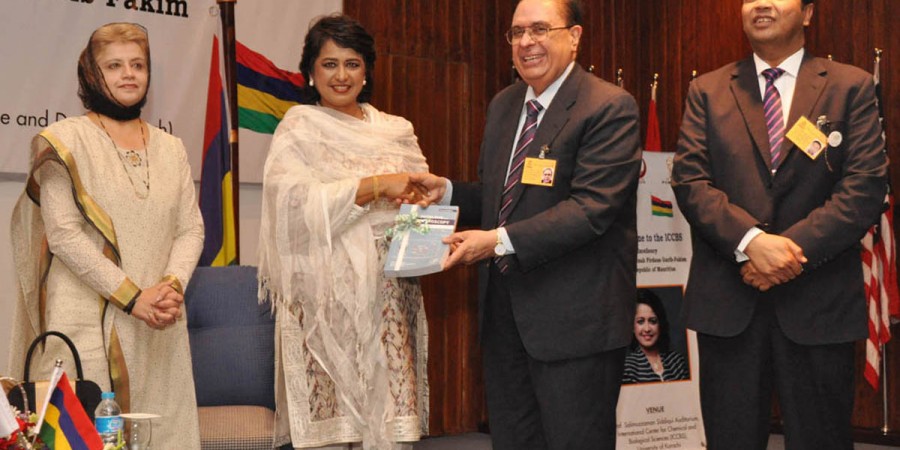 KARACHI, 19 APR (DNA) –  President of Mauritius, Dr Bibi Ameenah Firdaus Gurib-Fakim has emphasised the need for strengthening of bilateral ties in diverse areas including education, health, tourism and trade. Mauritius government would also like to have mutual education and research training programmes.

“I am proud to be a part of Pakistani academia, International Centre for Chemical and Biological Sciences (ICCBS), University of Karachi (UoK). This institution is like a family to me, where I spent my academic days as a research student,” she said.

She was speaking in an informal talk session held in the Prof. Dr Saleemuzzaman Siddiqui Auditorium, ICCBS-UoK here on Tuesday. The session was moderated by former Federal Minister for Science and Technology and former Chairman Higher Education Commission Prof. Dr Atta-ur-Rahman.

She warmly endorsed the suggestions of Prof. Attaur Rahman that Pakistan and Mauritius should make some mutual agreements regarding faculty and students exchange programmes, sharing live interactive video lectures and languages courses.

She said that Mauritius was seeking new ways of collaboration with Pakistan not only on the trade side but also in research and development and education sectors.

To a query about the economy of Mauritius, she said that Mauritius had developed from a low-income, agriculturally based economy to a middle-income diversified economy with growing industrial, financial, and tourist sectors. “Sugarcane industry owns a significant role in the Mauritian economy; it represents around 90 per cent of the arable land in Mauritius,” she said.

She declared some issues like a scarcity of skilled human resources, bolstering resilience to natural disasters and climate change pose a severe threat to Mauritius. She lauded the quality of Pakistani educational institutions especially ICCBS. DNA