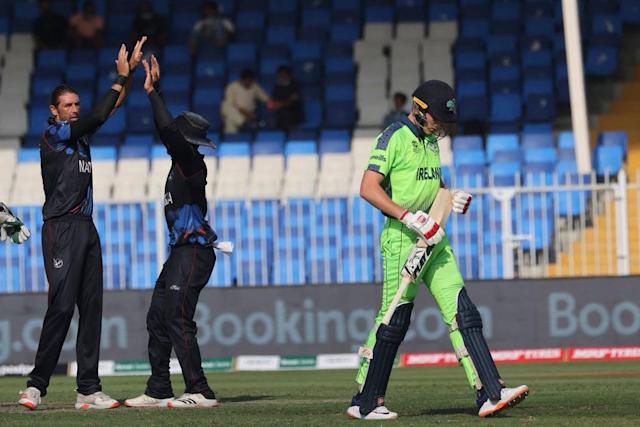 Sharjah , OCT 22 : Namibia steals the spot light making its way to super 12s of T20 world cup 2021 defeating Ireland. Ireland won the toss and elected to bat first against Namibia in the penultimate T20 World Cup first round Group A match. The game was a virtual knock-out tie for both the teams as whoever would have won will qualify for the Super 12s stage alongside Sri Lanka from the group. Ireland gave the target of 126 runs over the loss of 8 wickets. On the other hand Namibia achieved the target and won by 8 wickets. Namibia chased the target 9 balls before.

Namibia reached the Twenty20 World Cup second round for the first time on Friday when they defeated Ireland by eight wickets.

World number 19 Namibia, the lowest-ranked team in the tournament, chased down their modest target of 126 with skipper Gerhard Erasmus making an unbeaten 53.

They will finish behind Sri Lanka in Group A barring a heavy defeat for the 2014 champions in their final qualifier against Netherlands later Friday.

That would put Namibia in the same Super 12 section as India, Pakistan, New Zealand, Afghanistan and Scotland.

Earlier, Namibia defeated Netherlands on 20 oct whereas Srilanka deafeated Namibia in its first match by 7 wickets.

« Azerbaijan’s purpose is not revenge, but a call for future peace, Presidential aide says (Previous News)
(Next News) Horse racing season set to get underway at UAE’s 5 tracks »