NAB is focal institute of Pakistan under UN Convention against Corruption: Chairman 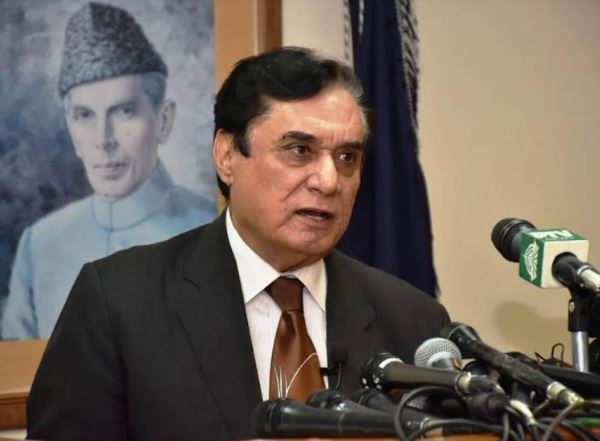 ISLAMABAD, APR 1 /DNA/ – NAB Chairman honourable Justice Javed Iqbal has said that NAB is the focal institute of Pakistan under UN Convention against Corruption and  a role model not only for Pakistan but also for SAARC countries.  The bureau has been elected Chairman of SAARC Anti-Corruption Forum which is a great success and honour for Pakistan.SAARC countries has lauded NAB’s performance.Transparency International Pakistan, World Economic Forum, Global Peace Canada, PILDAT, Mashal Pakistan has also appreciated NAB’s efforts whereas as per Gilani & Gallup survey , 59 percent of people have expressed confidence in NAB.Pakistan is the only country that has signed a memorandum of understanding with China to fight corruption. Pakistan and China are working together to ensure transparency in the ongoing CPEC projects in Pakistan.NAB is the only institution in the country which since its inception has recovered Rs. 864 billion from corrupt elements.
NAB is the only institution in the country which has returned the recovered money to various federal, provincial agencies and affected citizens.NAB officials not only consider eradication of corruption from the country as their national duty but Also committed to eradicate corruption.Because corruption is the mother of all evils and a major obstacle to Pakistan’s development and prosperity.The NAB has formulated an effective national anti-corruption strategy which has been recognized as the best anti-corruption strategy.Bureau has also introduced a new system of Combine Investigation Team (CIT) in order to benefit from the experiences and collective wisdoms of superior officers. The CIT mechanism has not only brought quality to the overall work procedures but also assured that not a single individual could influence the proceedings and results of the CIT and it was very encouraging.Encouraging results has already started pouring in.On the contrary, thanks to the effective legal follow-up of NAB, the esteemed accountability courts have convicted 1405 accused during the last four years and also imposed fines.The NAB attaches great importance to the training of its officers and personnel in order to enhance their competence in line with modern requirements. That is why NAB has set up its Pakistan Training and Research Academy in which money laundering and white collar crimes’ training of officers has been started for modern investigation of cases.
NAB has set up a Forensic Science Laboratory in Rawalpindi to examine documents, fingerprints and digital data, which has greatly improved the quality of investigations.
NAB has set up Anti-Money Laundering Cells at NAB headquarters to improve the quality of investigations.Witness Handling Cells have also been set up in all NAB regional bureaus to help NAB witnesses.NAB is a national body of corruption which has no affiliation with any political party group or individual and its affiliation is exclusively with the state of Pakistan.NAB has been given the responsibility to recover the months ey looted from plunderers.NAB is a people-friendly organization that believes in taking care of everyone’s self-esteem in accordance with the law.