Fawad says will be given additional portfolio of law ministry tomorrow 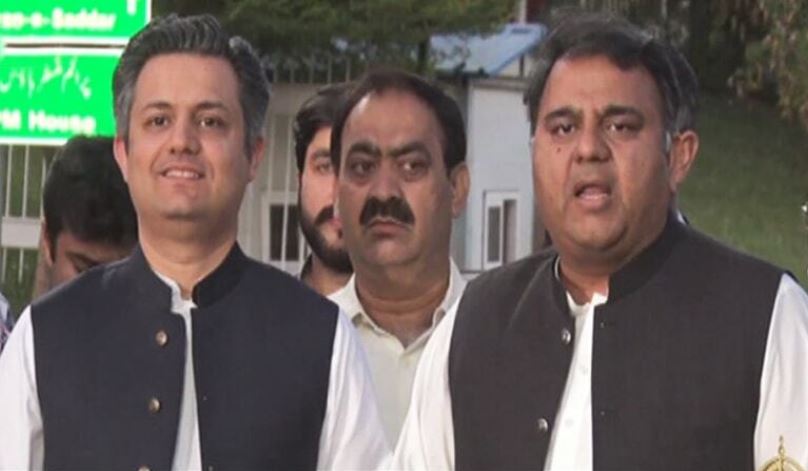 ISLAMABAD, APR 1: Information Minister Fawad Chaudhry announced on Friday that he was being given the additional charge of the law ministry tomorrow following the resignation of Barrister Farogh Naseem earlier this week.

Naseem had resigned as the law minister on Wednesday after his party, the Muttahida Qaumi Movement-Pakistan (MQM-P) parted ways with the PTI-led coalition government and threw its weight behind the opposition ahead of a no-trust vote against Prime Minister Imran Khan.

Along with Naseem, the MQM-P’s Aminul Haque had also resigned as the federal minister for information technology and telecommunication.

With seven seats in the National Assembly, the MQM-P’s decision will lead to PM Imran losing his majority in the lower house if the situation remains the same till Sunday, when voting on the no-trust motion is expected to take place.

Speaking to media persons alongside Energy Minister Hammad Azhar and Special Assistant to the Prime Minister on Political Communication Shahbaz Gill in Islamabad today, Chaudhry said after assuming charge as the law minister, he would approach the court to cancel the bail of PML-N President Shehbaz Sharif, who is said to be the candidate for the prime minister’s seat if the joint opposition’s no-trust move against the incumbent premier succeeds.

“I am amazed that a person who is on bail says he is a candidate for the prime minister’s seat,” he said.

Chaudhry added that he would also work towards initiating proceedings for the cancellation of the bail of Shehbaz’s son, Hamza Shehbaz.

The minister said the court would be approached for this purpose tomorrow.

He added that further action would be taken against PTI lawmakers who had defected to the opposition.

“The legal team met today and devised a strategy, and I am expecting that we will approach the Supreme Court on this matter tomorrow,” he told media persons, adding that the apex court would be asked to look into the matter in light of Article 184 of the Constitution.

He continued, “We want the Supreme Court to look into how it is possible that a no-confidence motion, which was drafted abroad, awakens overnight the consciences of 22 people [who are PTI defectors].”

Speaking about the no-trust motion, Chaudhry said it was still 48 hours before the voting, implying that a lot could happen within this time span. He expressed confidence that PM Imran would remain the prime minister.

He added that the people of Pakistan would not allow a regime change orchestrated from a foreign capital after “spending a few million dollars here”.

Chaudhry equated the opposition’s refusal to attend the National Security Committee meeting — where a document purportedly containing evidence of a foreign conspiracy to topple PM Imran’s government — to them being aware of the “conspiracy” to oust the prime minister.

“And this also shows that opposition leaders are also involved in this conspiracy,” he added.

“They said the US has attached [IV] drips to Pakistan and asked what will happen if these drips are detached,” Chaudhry said, adding that it was better if these “drips” were detached.

“The Pakistani nation is an honourable one and it is its bad luck that people like you [PML-N leaders] were forced upon them by external [forces],” he said. “People are aware of this conspiracy and standing against it.”

Chaudhry then went on to claim that protests were held across Pakistan “against people who have no conscience”, referring to the PTI’s dissident lawmakers, who have sided with the opposition in the no-trust vote against the premier.

“I salute those protesting [against the defectors]. You are our heroes,” he said.

Energy Minister Hammad Azhar alleged that efforts were being made to form a “government of foreign puppets” in Pakistan.

“I want to assure my nation that we will not let this happen,” he said.

Azhar went on to say that historically, “experiments of installing foreign puppets” had failed every time and would fail this time as well.

He said Pakistan and the country’s economy could not afford another tenure of one of the opposition parties in the government.

Azhar said the formal procedure for the removal of Pakistan from the Financial Action Task Force’s list was expected to start in June.

To a question, he clarified that there would be no change in the prices of petrol and electricity in the coming days.

In reply to another question, Chaudhry expressed the confidence that Pakistan Muslim League-Quaid leader Pervaiz Elahi would be elected as the Punjab chief minister tomorrow.