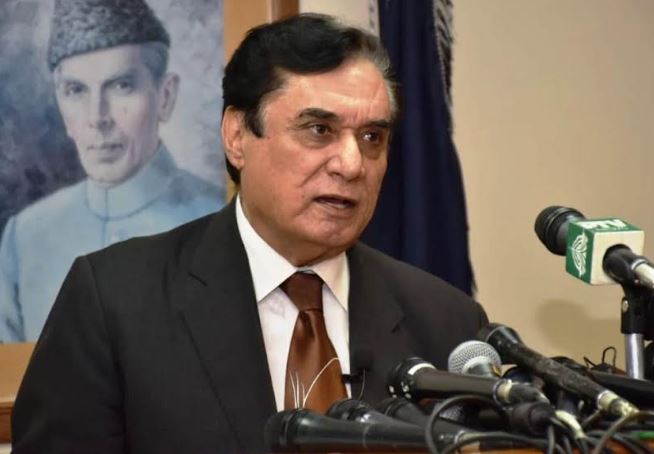 ISLAMABAD /DNA/ – The National Accountability Bureau (NAB) Chairman Justice Javed Iqbal said that due to vigorous prosecution of NAB, 1,405 corrupt persons were convicted which is testament to NAB’s outstanding performance for the last more than 4 years as compared to previous years as per law.

He said NAB has filed corruption references based on solid evidence against the big fish allegedly involved in money laundering in the esteemed accountability courts. Those who are claiming their innocence in the media should apply for day to day hearings of their cases in the relevant accountability courts where the esteemed accountability courts will decide the cases in accordance with the law.The NAB will continue to carry out its national duty to bring the big fish to justice in accordance with law without resorting to baseless propaganda against the institution.He said that NAB was committed to bring white collar cases of mega corruption to a logical conclusion as per law.

NAB has introduced a Combine Investigation Team (CIT) system in order to benefit from the experienced and collective wisdom of senior supervisory officers, not only for the effective follow-up of NAB over the last more than 4 years, but also for the effective accountability of the courts, the Honorable Accountability Courts has convicted 1405 accused.  Which is a clear proof of the excellent performance of the NAB.NAB is the focal institution of Pakistan under the UN Convention against Corruption (UNCAC) and the chairman of Saarc Anti-Corruption Forum.

NAB is considered a role model for the South Asian Association for Regional Cooperation (SAARC) countries for its efforts in eradicating corruption.NABhad recovered Rs. 584 billion from corrupt elements directly and indirectly from Oct 2017 to Dec 2021 which is record success.It reflects the commitment of the officers to fulfill their national duty to eradicate corruption from the country.He said that 1237 cases were under trial  in various accountability courts of the country.  The value of which is about Rs 1335 billion.NAB is the only organisation which has signed a memorandum of understanding (MoU) with China to oversee China-Pakistan Economic Corridor (CPEC) projects being completed in Pakistan.This was honour for Pakistan.A monitoring and evaluation system has been devised to improve performance of the institution on regular basis.

He said that youth is our future andNational Accountability Bureau (NAB) in collaboration with Higher Education Commission (HEC) signed a Memorandum of Understanding (MoU) to make collaborated efforts to root out corruption from the society and to make the youth aware of the negative effects of corruption in universities and colleges.Under this initiative, NAB has set up more than 50 thousands character building Societies in universities across the country. Provincial committees have been set up in consultation with the relevant federal and provincial departments to assist in the prevention of corruption and identification of shortcomings.He said that as per Gillani and Gallup survey, 59 percent people have shown trust upon NAB.He said that NAB has devised a comprehensive Quantified Grading System in order to further improve the performance of NAB Headquarter and all regional bureaus.Under Quantified Grading System, he said the NAB Headquarters and regional bureaus are being evaluated on annual and midterm basis at a given criteria which has proved very successful in increasing the repute and image of NAB manifold due to regular monitoring, inspection and implementation of decisions taken by the present management of NAB.NAB’s performance has been praised by reputable national and international organizations, while according to the Gilani and Gallup polls, 59% of people expressed confidence in NAB.