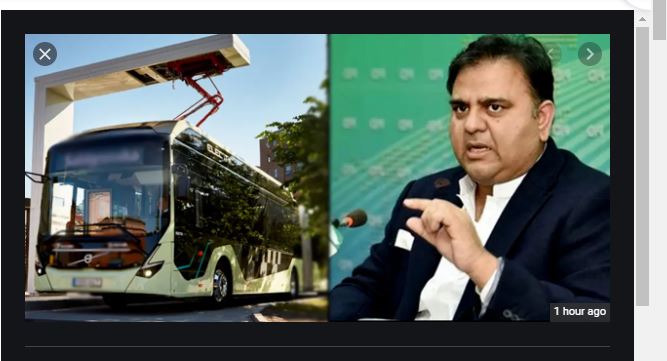 ISLAMABAD, OCT 07 (DNA) – Federal Minister for Science and Technology, Fawad Chaudhry on Wednesday offered support on behalf of his ministry for introducing electric buses in Karachi.

In a meeting with the Governor of Sindh, Imran Ismail, held here on Wednesday, Fawad Chaudhry said that his ministry was ready to extend every possible support for introducing electric buses in the port city.

“Ministry of Science and Technology is ready to extend every possible support for introducing electric buses in Karachi after Islamabad”, he said and added that the development of Karachi was the first priority of the Pakistan Tehreek-e-Insaf (PTI) government.

The governor agreed on the idea of launching electric buses in Karachi and assured his full cooperation in that regard.

Besides electric buses, the science and technology minister also offered support to the Sindh government regarding the waste management issue – a major problem of the provincial capital which had damaged the city.

Addressing a press conference here in Karachi, the science and technology minister said that efforts are underway to make Islamabad as the first-ever city of Pakistan to convert its public transport into electric vehicles in near future.

It is pertinent to mention here that Karachi – a city of over 14 million population has no proper transport system and citizens are forced to travel in old buses.

According to reports, no new bus was launched in the city from the past 15 years except 10 buses under Peoples Bus Service – launched by the PPP-led Sindh government two years back. Ironically, all the new buses that had come out on the road earlier have gradually disappeared. = DNA