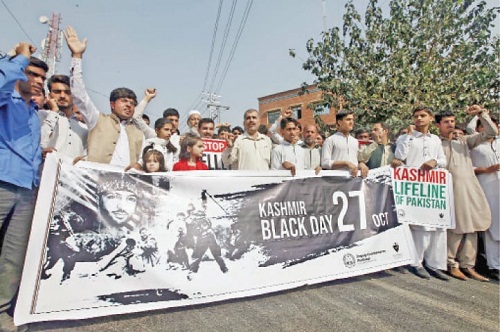 WASHINGTON, 15 Oct 2021 : The World Kashmir Awareness Forum (WKA), an advocacy group, has called on world powers to take steps to end India’s occupation of Kashmir where, it said,  the people’s demand for self-determination keeps growing stronger, despite brutal suppression.

In a statement released ahead of the 75th anniversary — on Oct 27–  of India’s massive invasion and occupation of Kashmir, known as “Black Day,” the forum said that the people of Jammu and Kashmir have been enduring relentless violations of privacy and human rights at the hands of Indian occupation forces.

“We denounce India’s occupation of Kashmir and the various other violations it has inflicted upon Kashmiris, including illegal surveillance, imprisonment, online harassment, and permanent revocation of democratic and legal rights since August 5, 2019.”

“On this monumental day”, it said, “Kashmir and its supporters reflect on the crisis that has defined hundreds of thousands of lives.

“We call on India to put an immediate end to the undemocratic surveillance, human rights abuses, and occupation,” the forum said.

“We demand an immediate end to the accelerated targeted killings and imprisonment of over a thousand of innocent civilians in the last few days.

“It is imperative that the world powers stop the Indian forces from continuing to occupy Kashmir, and we ask for the international community to demand accountability and justice,” the forum added.