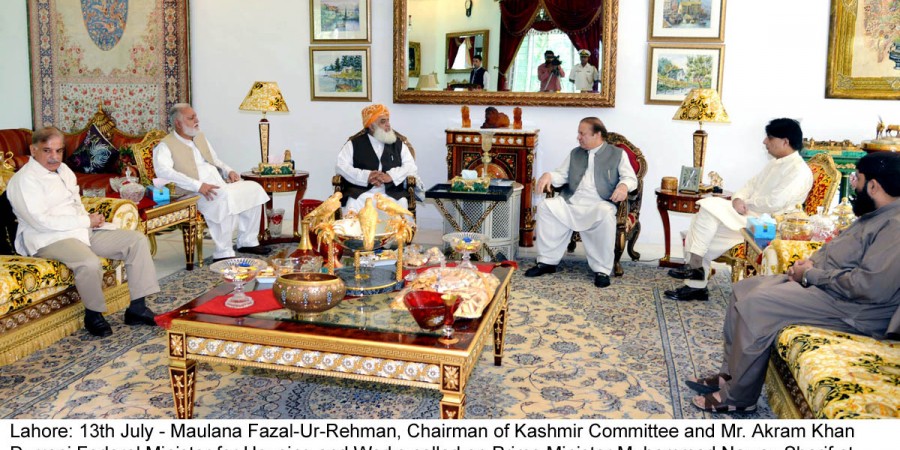 Matters of national significance were discussed during the meeting. Maulana Fazl-ur-Rehman apprised the Prime Minister on his recent talks with the Kashmiri leadership over the human rights violations by Indian military and paramilitary forces in Jammu & Kashmir.

The meeting reiterated the condemnation of the killing of Kashmiri leader Burhan Wani and many other civilians by the Indian military and paramilitary forces.

Prime Minister Muhammad Nawaz Sharif said that the government and people of Pakistan respect the sentiments of their Kashmiri brethren and will continue to support the Kashmir cause at each and every forum internationally come what may.

The Prime Minister said that the voice and struggle of the people of Indian occupied Kashmir cannot be suppressed through use of brutal force and human rights abuses. The Prime Minister said that the purpose of the special cabinet meeting is to devise the way forward for supporting the leadership and the people of IOK in the wake of the rapidly deteriorating situation in IOK due to oppressive actions of Indian security forces against innocent civilians of Jammu & Kashmir.

The Prime Minister stated that the resolution of the Jammu & Kashmir dispute is only possible by the realisation of the right to self determination of the people of Jammu&Kashmir, as per the UNSC resolutions, through a fair and impartial plebiscite under UN auspices.