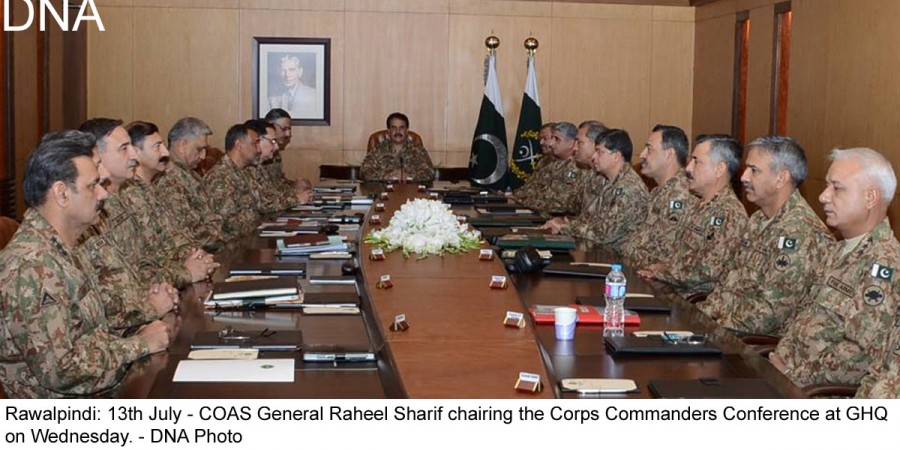 The army chief reiterated that the world needs to recognise aspirations of the Kashmiri people, their struggle for freedom and help resolve the long standing dispute for lasting amity in Kashmir and to promote enduring peace in the region.

External security situation was comprehensively discussed with particular emphasis on the situation in Afghanistan.

To scrutinise cross border movement and to ensure strict check on militant movement, the forum reviewed progress of measures being taken for effective border management.

During the monthly forum, the army chief also appreciated the relentless efforts of intelligence and law enforcement agencies in enduring peace and security during Eid in the face of numerous threats.

It is the worst civilian violence to hit the restive region of Indian-held Kashmir since 2010, when mass protests broke out against Indian rule.

Wani, a 22-year-old commander of Kashmir’s largest pro-independence militant group Hizbul Mujahideen (HM), was killed along with two other separatists during a brief gun battle with Indian government forces.

Wani joined the HM group at the age of just 15, and was viewed as a hero by many in Kashmir. The state’s former chief minister Omar Abdullah tweeted after his death that he had become the “new icon of Kashmir’s disaffected”.

Witnesses said tens of thousands attended his funeral despite a curfew imposed by Indian authorities, chanting independence slogans and firing pistol shots in his honour.

Indian Prime Minister Narendra Modi had called an emergency meeting to discuss escalating violence in India-held Kashmir amid anti-India protests that have left at least 30 people dead and hundreds injured in clashes with authorities.

HM is one of several groups that for decades have been fighting around half a million Indian troops deployed in the region, calling for independence for Kashmir or a merger with Pakistan.

Kashmir has been divided between rivals India and Pakistan since 1947, but both claim the territory in its entirety.

Tens of thousands of people, mostly civilians, have died in the fighting since 1989.

Violence has sharply declined in recent years following a major crackdown by the hundreds of thousands of forces deployed in the region.

But a recent uptick in militant attacks has galvanised frustrated young Kashmiris, many of whom deeply resent the military’s presence.

« Kashmir leadership looking toward Pakistan in difficult times: Fazl (Previous News)
(Next News) Edhi will be remembered for ever, says Ambassador Sun Weidong »