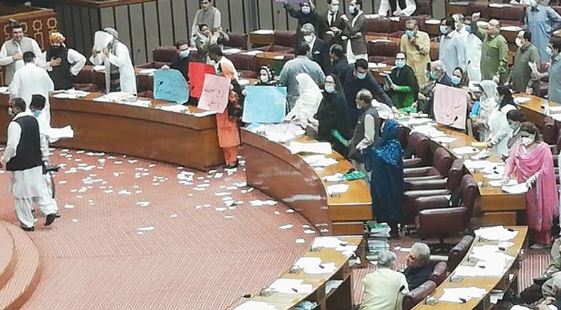 He asked National Assembly Speaker Asad Qaiser not to become a ‘tool’ in
the hands of Prime Minister Imran Khan. “You should perform your duties
as a custodian of the House,” he asserted.

He maintained that the attack on Sindh House was not only about the
integrity of Sindh but it was an assault on Pakistan, adding that in a
bid to preserve democracy in the country, the Opposition had to swallow
a bitter pill and tolerate a lot of things.

Shahbaz maintained that before coming to power, Imran Khan used to stand
atop a container and make tall claims about destroying the Opposition,
but now he has understood that the no-confidence motion to oust him from
the office will be successful.

“Although the PM accused us [the Opposition] of taking a bribe, the
government’s allies are testifying that we did not take a single penny
from anyone,” said Shahbaz.

Shehbaz said that even the allies of the PTI government had flatly
refused to support it against the no-trust motion submitted by the
opposition in the National Assembly.

He further said who else could be as reliable as Chaudhry Shujaat
of Pakistan Muslim League-Quaid (PML-Q), who had rejected the
ruling party’s claims about horse-trading by saying that there was no
sale or purchase of MNAs prior to voting on the no-trust motion.

He told the Inspector General of Police (IGP), Islamabad in clear and
categorical terms not to act upon the orders of the ‘selected’ prime
minister. “And if he does so, the law will take its course,” he warned.

Speaking on the occasion, Jamiat Ulema-e-Islam-Fazl (JUI-F) chief
Maulana Fazlur Rehman said he totally agreed with what Shehbaz Sharif
had said on the subject. “We will take the ‘illegitimate’ rulers to the
task because we are on the right side,” he claimed.

Fazl said he was surprised when he heard ‘selected’ premier sometimes
said that every MNA was free to vote according to his or her conscience
and then on other occasions he shouted abuses at them; call them
‘donkeys’ and ‘lotas’.

He claimed that the opposition had already won the battle against the
government.

“Now when Imran Khan Niazi is sensing defeat, he has started calling his
opponents names,” he said, and added, “A few years back, his men had
attacked the parliament, while yesterday (Friday) by storming the Sindh
House they attacked the federation.”

“We will see how the OIC moot takes place in Islamabad,” Bilawal
threatened and strongly condemned the attack at Sindh House by PTI
workers.

He asked Prime Minister Imran Khan to show a magical number of 172 else
step down from his post. DNA

« ICCI calls for implementation of new rent control act in courts (Previous News)
(Next News) Most of the dissident lawmakers will return to PTI: PM Imran »