Israel shuts down Palestinian radio station over ‘incitement to violence’ 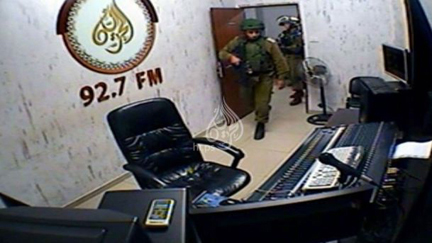 JERUSALEM: The Israeli military raided a Palestinian radio station in the West Bank on Tuesday and confiscated equipment it said was being used to broadcast calls to attack Israelis.
The military said it shut down the Al Hurria radio station in Hebron overnight and accused it of inciting violence in the volatile West Bank city.
Israel says the current spate of violence that started in mid-September has been set off by a Palestinian campaign of lies and incitement surrounding a sensitive Jerusalem holy site.
The Palestinians counter it is a result of frustration from nearly a half-century of occupation.
Eleven Israelis have been killed in Palestinian attacks, mostly stabbings. Sixty-nine Palestinians have died by Israeli fire, including 43 who Israel says were involved in attacks or attempted attacks. The wave of violence shows no signs of abating.
On Monday, a Palestinian stabbed and seriously wounded a 70-year-old man in central Israel just hours after another Palestinian knifed several people, including an 80-year-old woman, in a stabbing spree near Tel Aviv.
Hebron, the largest West Bank city, has been a particular flashpoint. Several hundred Jewish settlers live in fortified enclaves in the city, amid tens of thousands of Palestinians.
The military says over the past month Palestinians have carried out 29 attacks in the city, including 22 stabbings, four vehicular assaults and three shooting attacks.
It says the Al Hurria station has been encouraging stabbing attacks and glorifying the attackers.
The station’s director, Ayman Qawasmeh, said Israel troops raided the station after 2 am destroyed equipment and confiscated transmitters.
“This is a clear violent aggression on the Palestinian media,” he said. “We didn’t incite, we just reported the Israeli daily crimes against our people in Hebron. They want to silence our voice.”