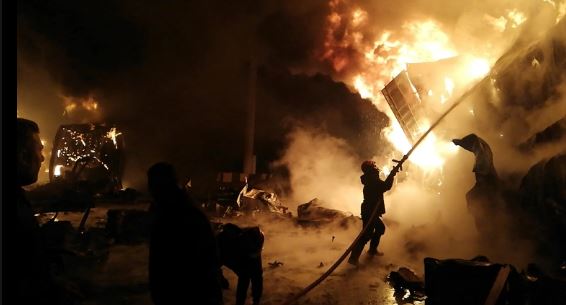 DAMASCUS: Israel had launched criminal aggression on the commercial port of Latakia at 3:25 am.This aggression caused the destruction of civilian equipment and facilities and demolition of more than /500/ containers including oil and spare parts for cars and machineries, along with damaging “Al Mada” Hospital and some other adjacent buildings and shops because of this cowardly Israeli aggression.

On the seventh of the same month, December 2021, the Israeli occupation aircraft carried out a missile attack that also targeted the container yard of the commercial port of Latakia.

This aggression comes within the framework of the Israeli government’s continued support for armed terrorist groups, whether they are ISIS, “Jabhat al-Nusra” or other armed terrorist organizations, it also comes to divert the attention from the deep crisis that the “Israeli entity” is going through, to delay the progress of the political process to resolve the crisis in Syria.

Israel is obliged to pay compensation to the owners of the destroyed properties during this treacherous aggression, which costs tens of millions of dollars.

However, the Security Council and the Human Rights Council, which pretend to be blind regarding the Israeli aggressions and other attacks that target the Syrian people, including children, women, the elderly and other civilians, are asked to undertake their responsibility in maintaining the international peace and security and preserving human rights, because such attacks lead to an explosion of tensions in the region, and are a flagrant violation of human rights, especially the right to live.