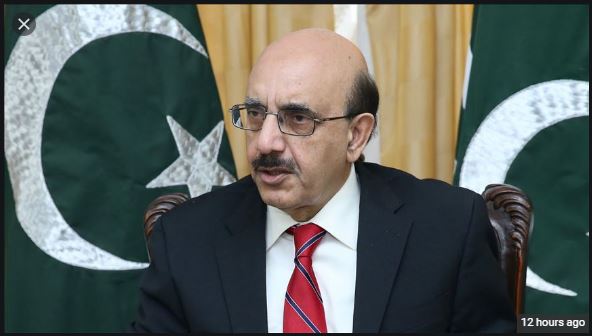 India carried out a genocide of 250,000 Muslims in Kashmir in 1947, according to Sardar Masood Khan, the president of Pakistani-administered Jammu and Kashmir.

Khan said nearly half a million Kashmiris have been killed, maimed, blinded, tortured, and forcibly disappeared by Indian forces over the past 73 years.

His comments were part of a conversation with Anadolu Agency in connection with Oct. 27, the day of Kashmir’s accession to India in 1947.

It is observed as a “Black Day” in Pakistan and Pakistani-administered Kashmir, viewed as the day Indian forces landed in Srinagar, the capital of Jammu and Kashmir, to force the princely state’s accession to India.

In a wide-ranging interview, Khan spoke about the controversial emergence of Indian-administered Jammu and Kashmir, the Kashmiri uprising of 1947, and several other issues that have since defined the fate of Kashmir and its people.

Anadolu Agency (AA): What is the significance of Oct. 27 in the history of Jammu and Kashmir?

Sardar Masood Khan (SMK): Oct. 27 is marked as a Black Day by the people of Pakistan and Kashmir.

It was on this day in 1947 that India invaded Jammu and Kashmir and occupied a large chunk of the state.

Immediately after its deployment, the occupying Indian force started brutalizing the people of Kashmir and carried out the first genocide and anti-Muslim pogrom in Jammu.

Some 250,000 Muslims were killed at the time and hundreds of thousands more were displaced and pushed to Pakistan.

Since then, nearly half a million people have been killed, maimed, blinded, tortured, and disappeared.

Broadly speaking, we see Oct. 27 as the starting point of the genocide of Kashmiris.

AA: With the hindsight of 73 years, what do you think are the errors that have led to the emergence of the Kashmir problem?

SMK: As far as the Kashmiris are concerned, I would say that they have not committed any error.

They have aspired to achieve freedom, first, from the Dogra dynasty’s despotic rule and, then, from Indian occupation.

In hindsight, though, if Sheikh Abdullah, the most popular leader of Kashmir in 1947, had not joined India, we could have saved Kashmiris from serial massacres spanning decades.

That one miscalculation, that one fatal misstep, plunged the Kashmiris into this dark night of oppression.

AA: What was the tribal raid and how has it impacted the Kashmir situation?

SMK: The so-called tribal raid has been grossly distorted by some Indian historians to twist the truth about Kashmir.

During the months of August, September, and October of 1947, war veterans of the territory now known as Azad Kashmir [Pakistani-administered Kashmir] started a war of independence against the maharaja’s [title of nobility among Hindus] tyrannical rule.

After driving the maharaja’s Dogra army out of the Azad Kashmir area, the people of Jammu and Kashmir would have liberated the entire territory if India had not intervened militarily on Oct. 27.

What Indian storytellers do not tell the world is that the maharaja, in collusion with the Indian leadership and the [British] viceroy, had already brought in and deployed regular armed personnel from the small princely states of Patiala, Kapurthala, and East Punjab, and unleashed them against freedom fighters.

This was an invasion of the territory before the invasion by the Indian armed forces.

If facts were cited, India would have had no justification to legitimize its invasion on the basis of the so-called tribal raid and a dubious instrument of accession extracted coercively from the maharaja.

Let it be understood that these were all Indian machinations to grab the territory of Jammu and Kashmir without the consent of the people, and to mislead them into believing that the measure was temporary and would be followed by a plebiscite.

AA: Oct. 27 also signifies the establishment of the government of Pakistani-administered Jammu and Kashmir. Can you compare the two parts of Kashmir in terms of political empowerment?

Azad Kashmir is free; the occupied territory is captured and besieged.

We have civil liberties and fundamental freedoms on our side; in occupied Kashmir, all rights of the people are being trampled.

Foreign visitors who have visited Azad Kashmir would testify that there are no military barricades, no checkpoints, no concertina wires to hamper the free movement of people, and no concentration of troops in towns and cities.

On the other side, 900,000 troops have been deployed to make life a living hell for the people.

Killings, blinding people, incarcerations, torture, disappearances, and sexual abuse have been normalized to the point of becoming a permanent feature.

In Azad Kashmir, we focus on the rule of law, good governance, and socioeconomic development. On the other side, even development projects are forced down the throats of the captive Kashmiri population.

Of course, we have our own problems with regards to promotion and protection of human rights, as would be the case in any other developing part of the world.

But across the Line of Control, a colony has been established under foreign occupation and alien domination. People are disenfranchised and dispossessed.

As I speak to you today, hundreds of thousands of Hindus are being transferred from all parts of India to the occupied state, in order to permanently change its demographic composition.

There is no precedent of such an illicit mass transfer of population, in an organized fashion, in this century or the last.

This is an outrage that has to be stopped at all costs.

AA: It was said that Pakistani-administered Jammu and Kashmir will be a base camp for efforts to resolve the Kashmir issue. What has been done to achieve this goal?

SMK: Yes, it’s true. Azad Kashmir [Pakistani-administered Kashmir] was established as a base camp for the liberation of the rest of Kashmir. That continues to be the abiding mission of the Azad state.

Of course, despite our best efforts, using all sorts of political, diplomatic and other means, we have not succeeded in securing freedom for our brothers and sisters in Indian-occupied Jammu and Kashmir [Indian-administer Jammu and Kashmir].

We work in tandem with Pakistan, which has been a window for the people of Jammu and Kashmir to project their voices to the multilateral forums, especially the United Nations, and capitals around the world.

We will continue our struggle until we achieve our objective of ensuring that the people of Jammu and Kashmir exercise their right to self-determination in accordance with UN Security Council resolutions.

AA: Many people, especially from Indian-administered Kashmir, have voiced grievances on what they see as Pakistan’s failures on the diplomatic front with regards to Kashmir. As a former diplomat, what do you feel is the reason for these sentiments?

SMK: There have been many breakthroughs on Kashmir since Aug. 5 last year.

Kashmir has been raised and discussed at the UN Security Council, albeit in informal sessions. The General Assembly and the Security Council have been apprised of Indian brutalities and an intensifying human rights crisis.

After decades, leading parliaments – the European Parliament, US Congress, UK Parliament – have held hearings or plenaries on Kashmir, something unheard of in the past.

The mainstream international media has held India accountable for its excessive measures, including communication blockades and bans on journalism.

India’s reputation as a state has suffered because of its illegal actions in Kashmir, its discriminatory treatment of Muslims in India, and its nuclear saber-rattling.

We know this is not enough. We have to fight against an environment of realpolitik which condones and underwrites India’s blatant crimes against humanity in Kashmir.

The challenge is to break this vicious cycle of impunity, which empowers India to violate the rights of the Kashmiris without any fear of prosecution or accountability.

We are, however, eternally grateful to the people and leadership of Turkey for their courageous stand on Kashmir.

President [Recep Tayyip] Erdogan has spoken at the UN General Assembly, in Pakistan’s Parliament, and in Delhi emphasizing the need for the Kashmir dispute to be resolved in accordance with the wishes of the Kashmiris.

We count Turkey’s staunch support and solidarity on Kashmir as an achievement. I request Anadolu Agency to convey our deepest gratitude to the Turkish people and leadership.