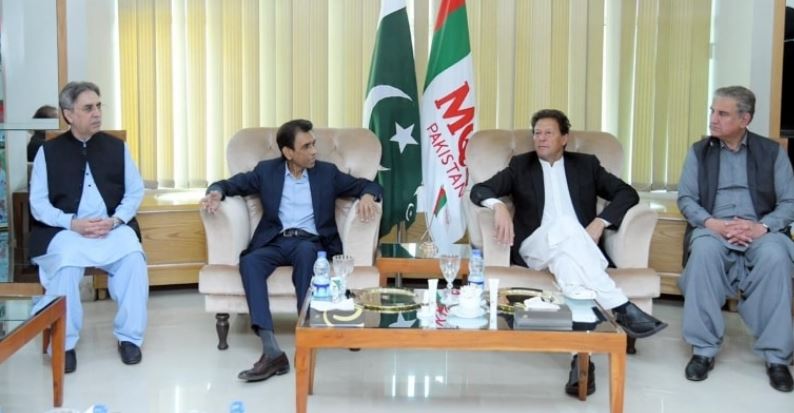 ISLAMABAD, MAR 9: Prime Minister Imran Khan arrived in Karachi on Wednesday, a day after the joint opposition submitted a no-confidence motion against him with the National Assembly Secretariat, and held a meeting with the leadership of Muttahida Qaumi Movement-Pakistan (MQM-P) and Grand Democratic Alliance (GDA), allies of his government in the Centre.

The premier was received by PTI and MQM-P members upon his arrival at the latter’s temporary headquarters in Bahadurabad. He was accompanied by Planning Minister Asad Umar, Foreign Minister Shah Mahmood Qureshi and Maritime Affairs Minister Ali Zaidi. The Prime Minister’s Office said the premier discussed the current political situation with the MQM-P leaders, who in turn assured him of full support.

FM Qureshi said the meeting was fruitful and the two parties had finalised a workable strategy for the future, according to a statement carried by Radio Pakistan. He said the MQM-P leadership expressed their full confidence in the premier and the PTI thanked its ally for its hospitality and support.

After his meeting with MQM-P leaders, the premier arrived at Sindh Governor House, where he held a meeting with GDA leaders and discussed the overall political situation in the country.

Soon after a brief meeting with PM Imran, MQM-P leader Amir Khan told media that no discussion took place on the no-confidence motion with the prime minister.

“It was a good gesture from the prime minister, who came to our office after a gap of three and a half years,” he told journalists.

He insisted that his party did not complain to the prime minister about “anything”.

Responding to a question on whether the MQM-P was supporting the no-trust move, Khan said his party was an ally of the government “but our options are open”.

When asked to shed light on details of the meeting with PM Imran, the MQM-P leader refused to divulge anything, saying, “We cannot tell you about what we discussed in detail.”

He stressed that all stakeholders had to play their role to fix the problems faced by the country.

Meanwhile, MQM-P convener Khalid Maqbool Siddiqui, while answering a question on the no-confidence motion, said that his party did not have any confidence in the “entire system”.

He said that during the meeting the MQM-P sought no reassurance from the prime minister on Karachi’s administrative issues.

When asked whether the MQM-P would support the premier in the opposition’s planned parliamentary maneuvre against him, Siddiqui responded: “We are supporting him that is why he is still the prime minister till now.”

In recent weeks, the opposition has been holding meetings with the government’s allied parties, including the MQM-P and the PML-Q, to get their support for the move against PM Imran, who, for his part, has also held a meeting with PML-Q to offset the opposition’s overtures and his visit to Karachi today to meet the MQM-P leadership is also part of the same efforts.