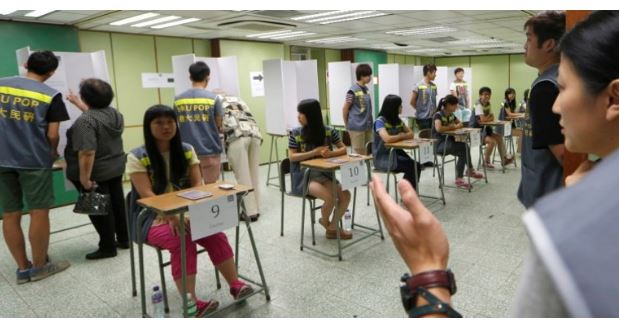 Voter turnout in Hong Kong looked set to hit a record low on Sunday, with just 26.5 per cent of the eligible population – or around 1.18 million people – having cast their ballots in the legislative election shortly before the polls were due to close.

Hong Kong media described it as the lowest turnout on record for the Chinese-administered region. The election is the first since Beijing introduced significant electoral changes to a territory that had enjoyed limited democracy.

Election booths are set to close at 10:30 pm (1430 GMT). The official results are expected on Monday.

Observers had expected a relatively low turnout following Beijing’s crackdown, arguing that many Hong Kong residents had given up hope of democratic changes.

However, Hong Kong Chief Executive Carrie Lam argued ahead of the polls that a lack of interest in the elections would indicate that people had no desire for change.

Beijing has stated that it wants only what it calls “patriots” to govern in Hong Kong, namely politicians who support the central Chinese Communist government.

The National People’s Congress, China’s ceremonial rubber-stamp legislature, has given a pro-Beijing committee power to appoint more of the city’s lawmakers, reducing the public’s role in the government.

Critics say the move further reduces the space for civil liberties in Hong Kong, a former British colony that was guaranteed a degree of autonomy from Beijing from the handover in 1997 until 2047.

Following massive protests in Hong Kong in the summer of 2019, voters in November that year installed a slate of pro-democracy candidates during district council elections as a rebuke to Beijing.

The central government in Beijing has sought to ensure that cannot happen again by overhauling the electoral system.

According to the new rules, for the first time only “patriots” have been allowed to run for election.

The vast majority of seats in the Hong Kong legislature are reserved for representatives of Beijing-friendly interest groups.

“The reform of the Hong Kong electoral system initiated by Beijing has made it almost impossible for critics to participate in Hong Kong politics as a member of parliament,” Katja Drinhausen of the Mercator Institute for China Studies in Berlin told dpa.

A controversial security law was passed in the Chinese Special Administrative Region a year and a half ago, helping to end protracted mass protests for more democracy.

Many civil rights activists, protest leaders and politicians ended up in jail, while other activists fled abroad to avoid persecution by the authorities.

Since July 1, 1997, the Hong Kong special administrative region has belonged to China again and is supposed to be governed independently according to the principle of “one country, two systems”.

At the handover from British to Chinese rule, the seven million Hong Kong residents were also promised that they would be able to enjoy “a high degree of autonomy” and many political freedoms for 50 years until 2047.

But since the Security Act was passed, many have only talked about “one country, one system.”