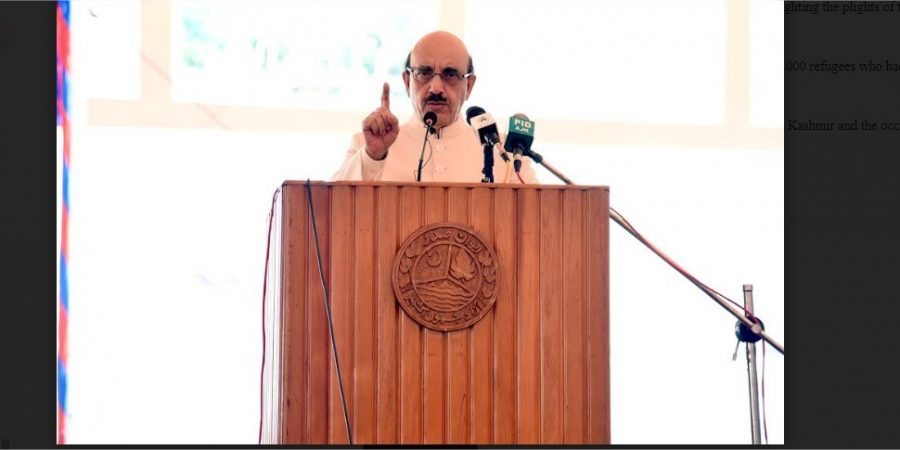 “We would not leave our brothers and sisters in occupied Kashmir alone at this critical juncture of their history and will go to any extent for their liberation from illegal foreign occupation.” he asserted.

While addressing the flag hoisting ceremony at the presidency here on the occasion of Independence Day of Pakistan on Friday, he said that Pakistan had come into existence to survive till the Day of Judgment, and in coming days, Pakistan would be playing a leadership role in South Asia.

The ceremony was also addressed by the AJK Prime Minister Raja Farooq Haider, and attended by members of the state cabinet, members of the state legislature, senior civil and military officials and a large number of people from different walks of life. A smartly turned out contingent of the AJK Police presented a guard of honour while both President and Prime Minister cut the cake to mark 73rd Independence day of Pakistan.

The AJK President said that the people of Jammu and Kashmir are fighting for the completion of Pakistan because they believe that Pakistan is incomplete without Kashmir and that they have no identity without Pakistan.

“The ongoing liberation struggle in the held territory is passing through the most critical phase of its history, and if India’s aggression is not reciprocated with the decisive actions in the next two to three years, there would be no Kashmir on the political map of the world,” he cautioned.

The AJK President said that the people of Azad Kashmir and the armed forces of Pakistan would collectively respond to the war imposed by India on us. “We need the spirit under which we extend practical support to our oppressed brethren on the one hand, and strengthen, stabilize and make Pakistan strong economically on the other hand,” he added.

At present, Sardar Masood Khan asserted that India’s fanatic regime was engaged in war against its own citizens, and its so-called secularism stands exposed. It has now proved that India is a Hindu fanatic state in which the minorities have no place, he said adding that the rise of Muslims and renaissance of Islam in this the region is now writing on the wall, and it is certain that the Muslims would once again be playing a leadership role in this whole region.

Paying glowing tributes to the valiant armed forces of Pakistan for defending the motherland at the Line of Control, and also paid homage to the leaders and workers of Pakistan movement who had offered sacrifices under the dynamic leadership of Quaid-e-Azam Mohammad Ali Jinnah for the creation of a separate Muslim state in the region.

On this occasion, the state president assured that the state government would utilize all-out resources to resolve problems of 40,000 refugees who had migrated from the Indian-held territory to Azad Kashmir in 1989.

He said that India was eyeing on the whole of Pakistan, and if it indulged in any adventure against Pakistan, the people of Azad Kashmir and the occupied Kashmir would offer stiff resistance.