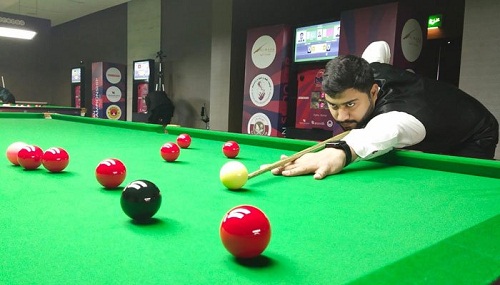 KARACHI : Pakistan’s Haris Tahir has qualified for the quarter final of the 36th Asian Snooker Championship after beating Qatar’s Ali Alobaidli in the pre-quarter final. His teammate Babar Masih, however, went down against Iran’s Siyavosh Mozayani in round 16.

Haris extended his lead once again by taking the fourth frame 60-51 before going down in the fifth frame on tie-break black-ball after the frame ended with 60-all.

With games 3-2 in favour of Haris Tahir, the 6th frame witnessed a great contest between the two cueists. Haris completed the sixth frame by taking two final colour balls to confirm his place in the quarter final.

In another match of round-of-16, Babar Masih went down 2-4 against Siyavosh Mozayani of Iran after once leading the game 2-1.

Siyavosh won the first frame 58-22, but Babar Masih fought back to win the next two and take a lead of 2-1. However, the Irani cueist won the next three frames consecutively to complete his win against Pakistan’s top cueist.