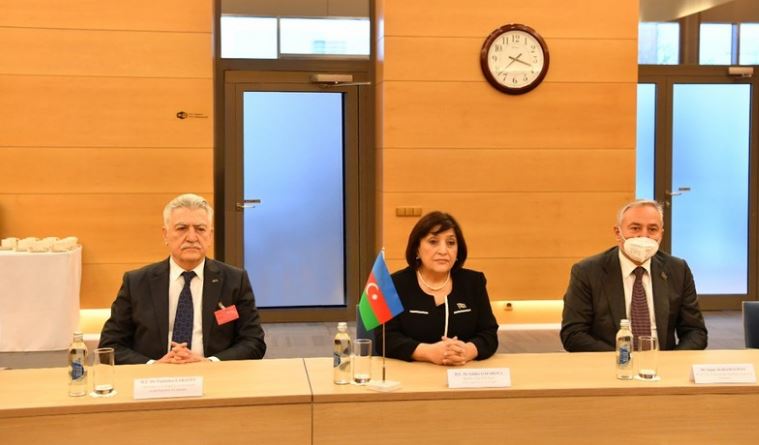 BAKU, FEB 5: Chair of the Milli Majlis Sahiba Gafarova has met with the Minister of Foreign Affairs of the Republic of Lithuania Gabrielius Landsbergis as part of her current official visit to that country.

Landsbergis welcomed the leader of the Azerbaijani legislature and the delegation led by her cordially. He mentioned the sound relations between Azerbaijan and Lithuania, recalled his first trip to our country with pleasure, and touched on Lithuania’s successful projects in Azerbaijan. Lithuania is invariably behind the territorial integrity of Azerbaijan, added the Lithuanian Minister of Foreign Affairs.

Chair of the Milli Majlis Sahiba Gafarova voiced the gratitude for the generous hospitality extended to the arrivals before telling Landsbergis that that was her first visit to the Republic of Lithuania as Speaker of Parliament and that it was taking place on the invitation of the Chair of the Lithuanian Seimas Viktorija Čmilytė-Nielsen. Having expressed satisfaction with the meetings taking place in the course of the visit, Gafarova added that she hoped it would serve the continued growth of the bilateral friendship as well as that the Azerbaijani-Lithuanian amity and cooperation would keep advancing.

Azerbaijan and Lithuania are friendly states. The scope of their interaction includes many areas and is in the interests of both nations, according to the leader of the Milli Majlis. There are now ample opportunities to deepen the relationship further; it is important to intensify the connexions between the two legislatures in this context.

Whilst telling Landsbergis of Azerbaijan’s ties with the European Union, given that Lithuania is an EU member, Mrs. Gafarova underlined the immense importance that Azerbaijan attaches to co-operating with the EU. The EU Council President Charles Michel paid a visit to Azerbaijan in July 2021, while President Ilham Aliyev of the Azerbaijan Republic took part in the 6th EU European Partnership Programme Summit in Brussels. The energy cooperation with the EU matters much, too; apart from pumping crude oil over, Azerbaijan has also become a dependable supplier of natural gas to Europe due to the South Gas Corridor, which, too, is a weighty input in the energy security of Europe.

New realia are set in across the South Caucasus after Azerbaijan’s historic victory in the 44-day Patriotic War of 2020, Sahiba Gafarova continued. The conflict is committed to history. Azerbaijan is repairing and rebuilding independently its de-occupied territories, wants peace and security in the region, and has repeatedly invited Armenia to sign a peace treaty based on mutual recognition of sovereignty and territorial integrity. This would make it possible to begin delimiting and demarking the state borders, reopen all the communications in the region and normalize the relations. Armenia truly should take in the new reality of the region and discharge what tasks befall it in the cause of ensuring peace and stability in our corner of the world.

The Lithuanian minister was then made aware of the projects underway and the investment opportunities of our country. The Chair of the Milli Majlis pointed at the excellent investing options linked to the Alat Free Economic Zone, the Araz Valley Free Economic Zone, and the Aghdam Industrial Park being hatched in our de-occupied territories as well as agrarian parks, the ICT, and the renewable energy sector. Azerbaijan invites Lithuanian companies to invest in the projects undertaken down here, too, Sahiba Gafarova said. She went further to bring up the strategic significance of the Zangazur Corridor, saying that its opening would clear new horizons not merely for the region but also for the European Union Member States.

Also, during the meeting, there was an exchange of opinions about other subjects of shared interest.