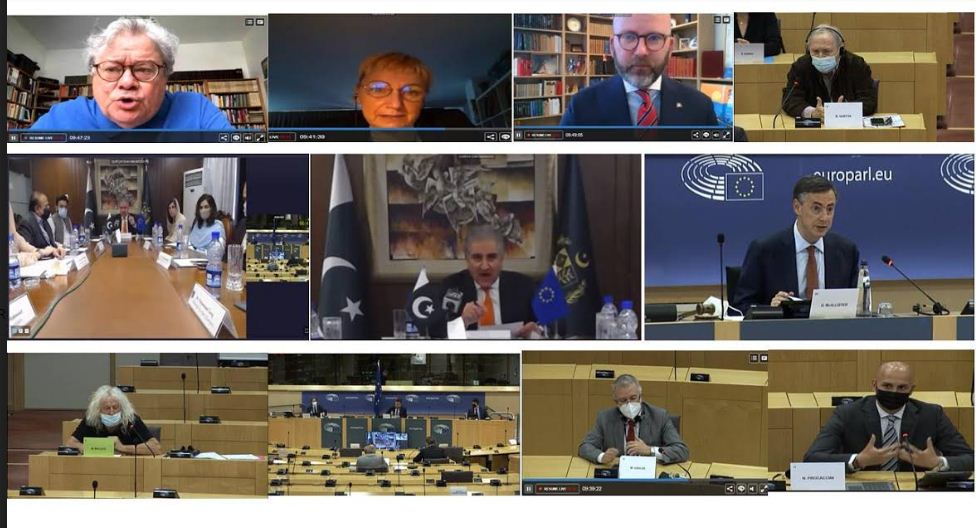 ISLAMABAD, MAY 26 /DNA/ – Foreign Minister Makhdoom Shah Mahmood Qureshi addressed the Foreign Affairs Committee (AFET) of the European Parliament (EP) at the invitation of its Chair MEP David McAllister, on May 26.

The Foreign Minister thanked the Chair and the members of AFET for inviting him to address the prestigious Committee of the EU Parliament. He underscored the importance of regular parliamentary exchanges between Pakistan and the EU.

In his remarks, Foreign Minister Qureshi dilated upon various aspects of Pakistan-EU relations and regional and international developments. He stated that the Pakistan-EU Strategic Engagement Plan (SEP) had ushered in a new phase in the partnership by providing a solid foundation and framework for multidimensional cooperation between the two sides.

Highlighting the enormous potential in further expanding Pakistan-EU ties in diverse spheres, he conveyed Pakistan’s readiness to continue to work for a productive and constructive partnership.

Underscoring the importance of trade and economic cooperation, Foreign Minister Qureshi underscored that the EU’s GSP Plus facility to Pakistan had been mutually beneficial and played an important role in growth of trade between the two sides. He reaffirmed Pakistan’s commitment towards effective implementation of GSP Plus related international Conventions. He also appreciated EU’s support to Pakistan in the fight against COVID-19 Pandemic.

Expressing disappointment at the adoption of a resolution by the European Parliament on blasphemy laws in Pakistan, Foreign Minister Qureshi emphasised the importance of understanding the special feelings and reverence Muslims have for the personality of the Holy Prophet (PBUH). Freedom of expression could not be used to hurt religious feelings of others and willful provocation and incitement to hatred and violence must be universally outlawed. The Foreign Minister stressed that xenophobia and Islamophobia were on the rise and Pakistan and the EU should work together for peaceful coexistence, and interfaith and cultural harmony.

Foreign Minister Qureshi underscored that peace and stability in Afghanistan are paramount for realizing Pakistan’s vision of regional economic integration. Pakistan wishes to see an end to the Afghan conflict through an Afghan-led and Afghan-owned negotiated political settlement. Pakistan has played and continues to play a key role in facilitating the Afghan peace process. The current peace process is a historic opportunity and all Afghan parties should work constructively to secure an inclusive, broad-based and comprehensive solution.

Foreign Minister Qureshi maintained that the Jammu and Kashmir dispute remains the single biggest obstacle in the way of building durable and lasting peace in South Asia. Instead of responding positively to Pakistan’s overtures for peace, India unilaterally and illegally moved to change the status of IIOJK, which is a UN recognised disputed territory, and vitiated the environment. The onus was on India to create an enabling environment. Pakistan remains committed to the peaceful resolution of the Jammu and Kashmir dispute in accordance with UN Security Council resolutions and wishes of the Kashmiri people. Highlighting India’s disinformation campaign against Pakistan as unveiled by the EU Disinfolab, the Foreign Minister urged the EU not to allow the names of its institutions to be misused by third countries.

The Chair of AFET, MEP David McAllister, in his remarks highlighted the importance of Pakistan-EU relations and the Parliament’s interest in further strengthening this partnership. He thanked the Foreign Minister for his detailed exchange of views with AFET Committee.

Members of the AFET Committee and heads of delegations for relations with third countries and regions participated in the session. The 71 member AFET Committee is one of the most prominent and influential Committees of the European Parliament. It oversees and provides guidance to the EU’s Common Foreign and Security Policy and plays an important role in matters related to human rights and fundamental freedoms as well as finalization of EU’s international agreements.