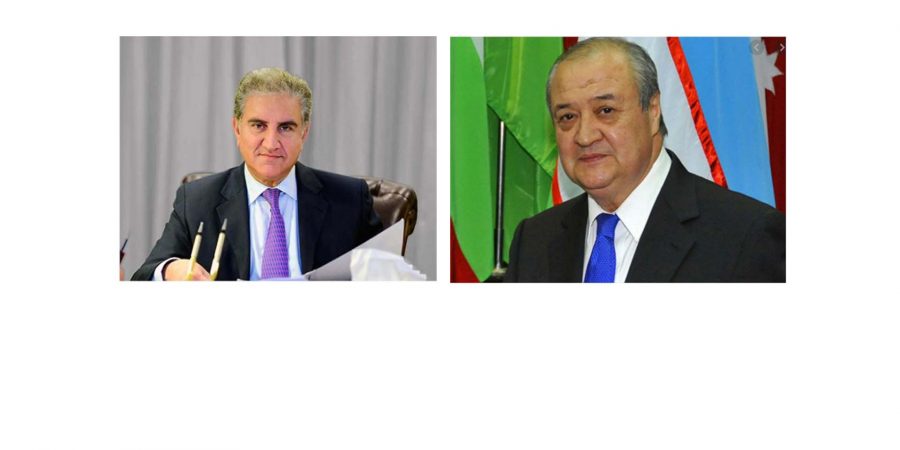 Foreign Minister Qureshi thanked his Uzbek counterpart for the assistance extended by the Government of Uzbekistan to repatriate stranded Pakistani nationals from Tashkent. He also apprised him of the steps being taken by the Government of Pakistan to save lives and secure livelihoods in the wake of the Pandemic.

In the bilateral context, the Foreign Minister stated that the Inaugural Session of Bilateral Political Consultations shall be held in Islamabad as soon as COVID-19 situation stabilizes. The two Ministers underlined the need to increase the volume of mutual trade and expedite finalization of other bilateral initiatives.

Foreign Minister Qureshi shared deep concern over continuing double lockdown in IIOJK as well as the intensification of military crackdown, fake encounters and extra-judicial killings by Indian occupation forces. He apprised his Uzbek counterpart that 5 August 2020 marked 365 days since India’s illegal and unilateral action last year. He denounced India’s moves to alter the demographic structure of IIOJK by introducing new domicile law and granting domicile to non-Kashmiris, calling it a clear violation of relevant UN Security Council resolutions and international law, including the 4th Geneva Convention. The Foreign Minister also highlighted demonization of Muslims in India in the context of Covid-19, underlining that it should be rejected by the international community.

Foreign Minister apprised his Uzbek counterpart that the intensified ceasefire violations by India and enhanced tensions pose threat to regional and international peace and security and highlighted Pakistan’s efforts to sensitize the world about such risks.

Foreign Minister reiterated Pakistan’s commitment to facilitate peace and reconciliation process in Afghanistan. He expressed hope that commencement of Intra-Afghan Negotiations will contribute towards this process.

The Foreign Minister expressed thanks for the invitation extended to him to visit Uzbekistan and expressed willingness to undertake the visit at the earliest convenience.

The two Foreign Ministers agreed to remain in close contact to take forward the important bilateral agenda and close cooperation in the regional context.