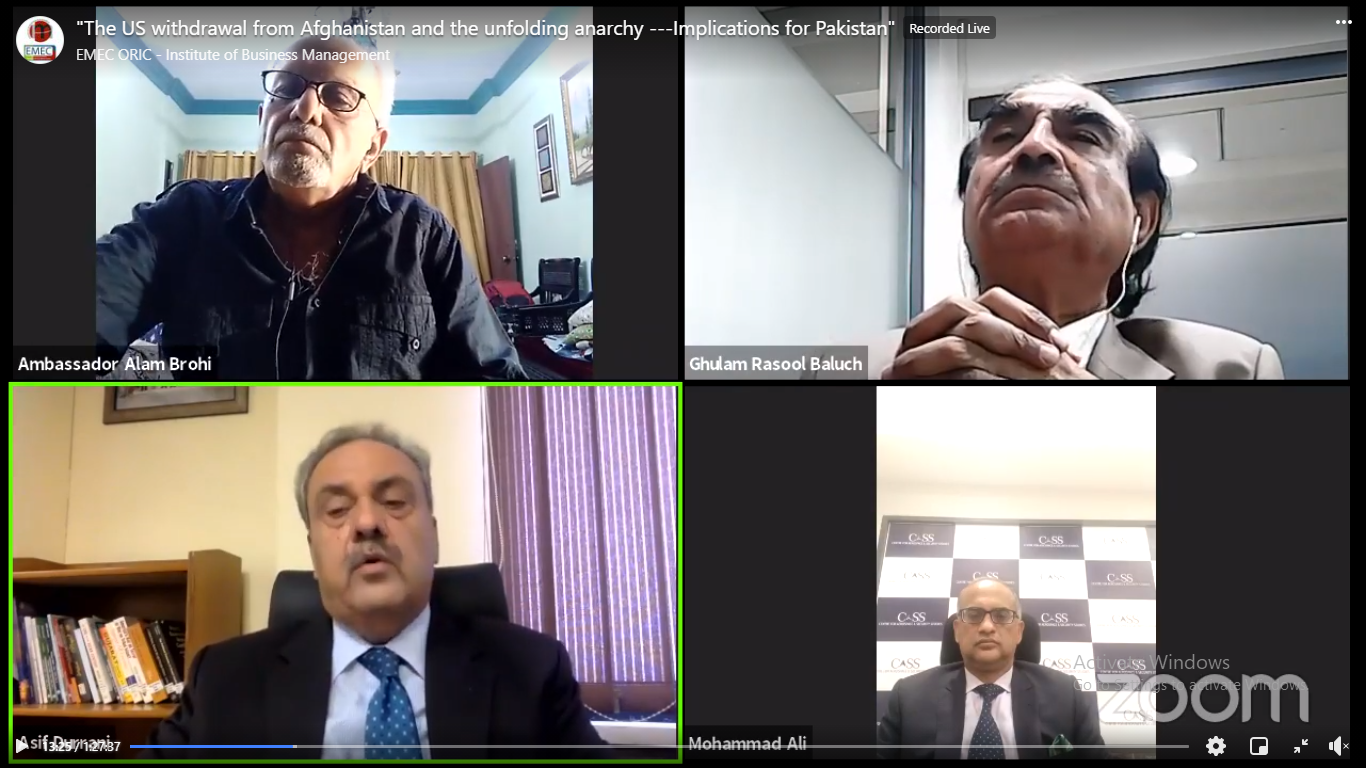 The Global and Regional Studies Center at the Institute of Business Management (IoBM) recently held a webinar on the “US withdrawal from Afghanistan and the unfolding anarchy – Implication for Pakistan.” The panelists included Ambassador Asif Durrani, Ambassador Alam Brohi, and Syed Muhammad Ali, Director, Strategic Affairs, Centre for Aerospace and Security Studies (CASS). Ambassador Ghulam Rasool Baluch was the moderator. Mr. Asif Durrani said that if the Taliban control Afghanistan, the region and the world will anticipate how the warlords will pursue their activities and what will be the fate of the drug money. The US will continue to influence Afghanistan’s politics despite its exit. Amb. Brohi said that the Taliban are trying to capture Afghanistan’s rural areas while encircling urban centers. If the Afghan military secures urban centers, the civil war is expected to be fiercer than before. He called upon Pakistan’s Foreign Affairs and military establishment to curb any possible crisis that may arise.

Mr. Muhammad Ali said that the US is leaving Afghanistan, not because of war fatigue but Biden administration’s objective to return to great power competition. The US will reduce its engagements in the developing world to contain China’s rise as a superpower.  He shared that the Taliban, after acquiring power, should convert their hard power success into political legitimacy and international diplomatic recognition. Pakistan should be prepared to handle a major exodus of Afghan refugees from Afghanistan. Mr. Ali added that regional neighbors should work towards Afghanistan’s nation-building by offering security assurance for their collective interests. Amb. Baluch opined that the Afghan crisis is yet to reach its crescendo. The challenge for Afghan leaderships primarily, and the neighbors and the world in general, is how to prevent this calamity. The world will help Afghanistan once there is internal peace. In his closing remarks, Amb. Baluch said that diplomatic initiatives should engage regional countries such as China, Turkey, Iran, Russia, and even India to ensure they will not exploit any turmoil that transpires in Afghanistan. He asserted that the UN and international communities must be brought into the framework to prevent humanitarian disaster which might occur due to unfolding anarchy in Afghanistan.