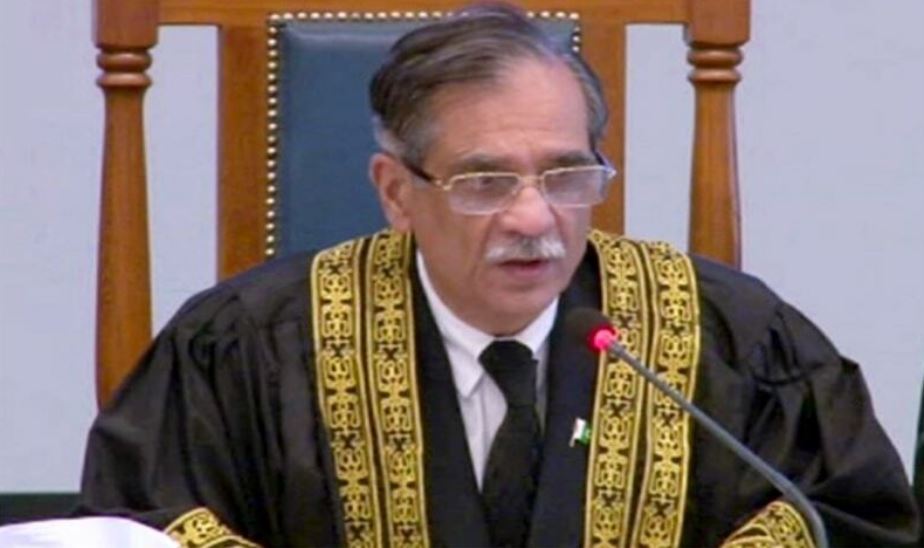 An investigative report published today in The News by journalist Ansar Abbasi, quotes Shamim as saying in an alleged affidavit that he witnessed Nasir relaying instructions to a high court judge to not release the the father-daughter duo in the corruption references against them.

According to the alleged affidavit, Shamim claims the ex-CJP had travel to GB for vacations in 2018 and on one occasion appeared “very disturbed” while speaking to his registrar on the phone, asking him to get in touch with a high court judge.

Shamim said that Nisar was finally able to get in touch with the judge and told him that Nawaz and Maryam must remain in jail until elections are over, after which “he became calm and happily demanded another cup of tea”.

According to the document, Shamim said he told Nisar that Nawaz had been falsely implicated, to which the former CJP replied: “Rana Sahib the chemistry of Punjab is different from GB.”

Speaking to Dawn.com, the former chief justice vehemently denied the allegations levelled against him and called the report a “self-motivated story”.

“I have never spoken to anybody or any high court judge in connection to any matter related to Mian Sahab,” he said.

He added that he could only remember speaking to Shamim when he called him to offer condolences about the latter’s wife passing away. “At the time he had voiced grievances regarding his extension,” Nisar recalled, adding that Shamim could have “any motive” for making the claims.

The former chief justice reiterated that the claims were “absolutely untrue”.

When asked why he had not issued a public statement on the matter, he replied: “Why should I? […] I don’t want to stoop to his level”.

An accountability count had on July 6, 2018 — 19 days before the general elections — convicted Nawaz Sharif, Maryam Nawaz and her husband retired Captain Mohammad Safdar in the Avenfield Apartment reference and handed them jail terms of 10, seven and one years, respectively, for owning assets beyond known sources of income.

NAB had filed the reference regarding the high-end properties in London, along with two others, on the Supreme Court’s directives in the landmark Panamagate verdict which deseated Nawaz as the prime minister.

Nawaz and Maryam were later arrested by the National Accountability Bureau (NAB) on July 13, 2018 upon their arrival in Lahore.

Meanwhile, PML-N President Shehbaz Sharif said that the “explosive” news report was yet another vindication for Nawaz and Maryam in the “court of public opinion”.

The report peeled off a “thick layer of a grand scheme employed to target” the PML-N chief and his daughter, he said.

PML-N Information Secretary Marriyum Aurangzeb also said that the “disgusting conspiracy” against the former premier and the characters involved in it were being exposed.

She said that with the latest development, Nawaz and Maryam’s innocence was “clear as day”, adding that the individuals involved in the incident should be brought to justice and punished.

“This conspiracy was not only against Nawaz but also against Pakistan and the people of Pakistan,” she said.

“We always knew it but it has now been made public — how brazenly Nawaz and Maryam were denied justice,” said PML-N leader Mohammad Zubair. He added that the report had proven that the two were “falsely implicated”.

“While Saqib Nisar stands exposed, the cases against Nawaz and Maryam should be set aside,” he said.

On the other hand, Information Minister Fawad Chaudhry said: “What kind of joke[r]s are running campaigns in this country to prove Nawaz is being oppressed”.

The minister said that instead of “fabricating silly stories and conspiracy theories”, Nawaz should tell about the source of the money for the Avenfield Apartments.

Special Assistant to the Prime Minister for Political Communication Dr Shahbaz Gill said the “sudden” development was due to the upcoming hearing of Maryam’s appeal against her conviction in the Avenfield reference.

Stating that the PML-N leader wanted it “delayed at any cost”, Gill said a first information report should be registered against Shamim for keeping mum on the matter for so many years. He also questioned how Shamim was appointed a judge in GB.

The PM’s aide also questioned the source of the money used to purchase apartments abroad by the PML-N leaders. “There will be more [attempts] to stop [the hearing for] Maryam’s appeal by trying to influence the courts,” Gill said.