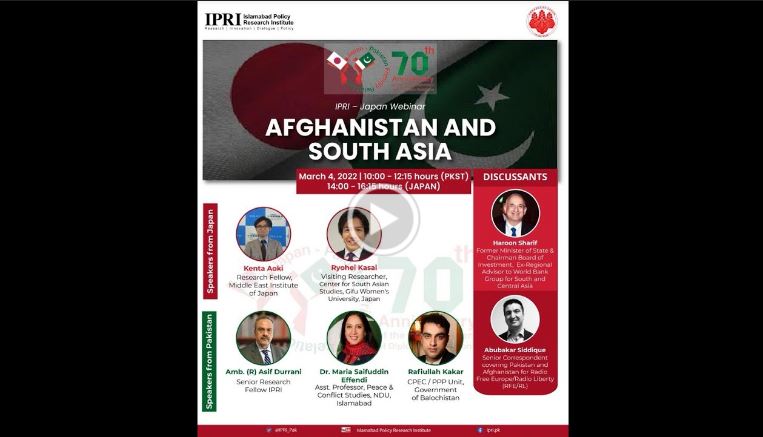 ISLAMABAD, MAR 4 /DNA/ – The Embassy of Japan and Islamabad Policy Research Institute (IPRI) jointly organized a webinar titled “Afghanistan and South Asia” on Friday, March 4 to deliberate upon the various perspectives concerning existing situation in Afghanistan as well as to exchange views and knowledge on other subjects of regional and international interest.

AOKI deliberated upon “Resurgence of Taliban and Its Implications to Japan and Pakistan” Whereas Mr. KASAI spoke on “Japan’s Efforts in South Asia in an Age of SDGs, Pakistan’s Development Potential and Geostrategic Opportunities, Japan’s Role in Pakistan’s Comprehensive Development”.

As this year marks the 70th anniversary of the establishment of diplomatic relations between Japan and Pakistan, the webinar would help promote and develop not only intellectual exchange between the two countries but would also contribute towards further enhancing mutual understanding and exchange of information and knowledge on issues of regional and global importance.

The webinar was open to public and available at Youtube: https://www.youtube.com/watch?v=5OFhWIoTGts

« Speakers stress for Women economic empowerment (Previous News)
(Next News) Two Sessions have great significance not only for China but entire world: envoy »