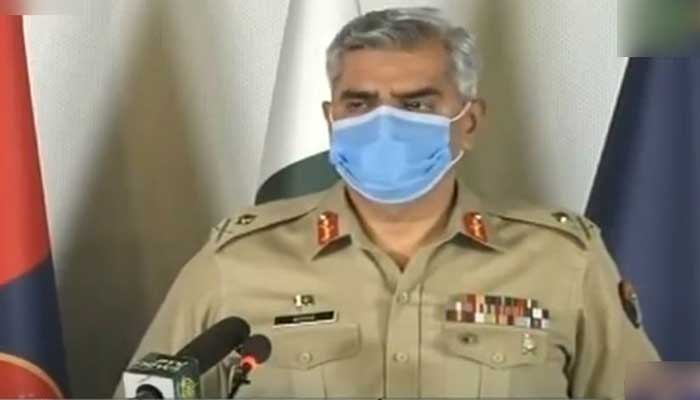 “Yesterday such a statement was given in which facts surrounding the events that day were attempted to be twisted,” he began by saying.

He said that after the Pulwama incident, on February 26, India violated all international principles and attacked Pakistan. “They not only faced defeat but humiliation all over the world.”

“Our timely response derailed their efforts. Their planes and the explosives they had come to rain down on the Pakistani people, they instead dropped on empty mountains. They left in a panicked state after being confronted by our planes. “

He said that in response, the Pakistan Army, in accordance with the people’s wishes, sought to “teach the enemy a lesson”.

“On this decision, all civil and military leadership was on a single page. We responded with full might in the light of day and shot down two planes, along with arresting their pilot Wing Commander Abhinandan [Varthaman],” said the DG ISPR, recalling the events.

He said that the enemy was in such a panicked state that it shot down its own helicopter.

Maj Gen Iftikhar said that Pakistan secured a “clear victory” that day against India. He said not only was India’s hollowed state of preparedness exposed that day but the entire Pakistani nation’s heads were held high.

He said this triumph was not only celebrated in Pakistan but the entire world recognised it. “India held its non-availability of Rafale jets accountable for the defeat,” he added.

The DG ISPR said that the government of Pakistan, in a measured and responsible move, decided to “give peace a chance” and hand over the captured war prisoner Wing Commander Abhinandan over.

He said the move, which was in accordance with Geneva Convention, was lauded the world over.

“I wish to set the history straight once more. Pakistan first demonstrated it capability and resolve. The decision was then made keeping all war options in mind and from a position of strength,” Maj Gen Iftikhar said.

He stressed that the civil and military leadership were prepared to combat “any sort of situation” with full preparedness.

“We gave them a bloody nose and its still hurting,” the DG ISPR said.

He said that linking the “mature response of a responsible state” with regard to Wing Commander Abhinandan’s release to any thing else is “highly regrettable and misleading”.

“This is actually tantamount to making Pakistan having the upper hand on India and its victory against it controversial,” he said.

Maj Gen Iftikhar said he thinks this would be unacceptable to any Pakistani.