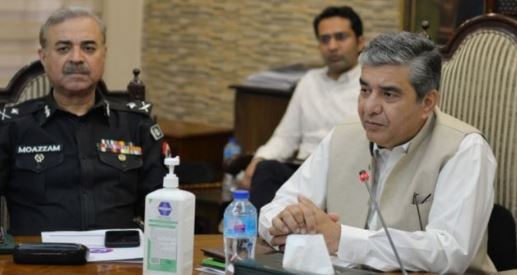 Peshawar: Chief Secretary Khyber Pakhtunkhwa Dr Shahzad Khan Bangash has said that recent cases from North Waziristan will not demoralize and deter us from the course as we will keep on pushing till the virus was wiped out of the region and children were protected from the incurable disease.

He said this while chairing Provincial Task Force Meeting here Tuesday at his office to review status of preparedness for the upcoming round of National Immunization Drive (NID) starting from May 23, 2022 in the province.

Dr Shahzad Bangash said that certain challenges in the pockets of southern parts of the province along with population movement are some of the hiccups hampering efforts for polio eradication.

“However, he said that great gains have been made in the fight against polio and every effort will be made by the government to sustain those gains along with fixing the remaining gaps”, he maintained.

Provincial Health Minister Taimur Saleem Jhagra, during his comments, said that there is no denying the fact that significant achievement has been made in polio eradication yet microlevel challenges were still there and need adaptation of strategies for the quick fixes.

He said that pragmatic solution based on ground challages were need of the hour adding that it was not time for blame games rather for finding solutions.

Taimur Jhagra said that we need to create greater health ownership of the polio programme at district levels adding that government was focusing on improving primary healthcare system across the board so that fruits of these efforts are reaped by all and sundry.

“ Small strides in right direction leads to fundamental gains” he said, adding that a lot of excellent work is happening at the field level and the government remains committed to polio eradication with the support and guidance of all technical partners.

Chair of Polio Oversight Board & President Global Development BMGF, Dr Christopher Elias, said that new cases from North Waziristan were disappointing but not surprising as we knew it from the environmental samples.

He congratulated the leadership of the government at all levels saying that the gains made in the fight against polio would not have been possible without that.