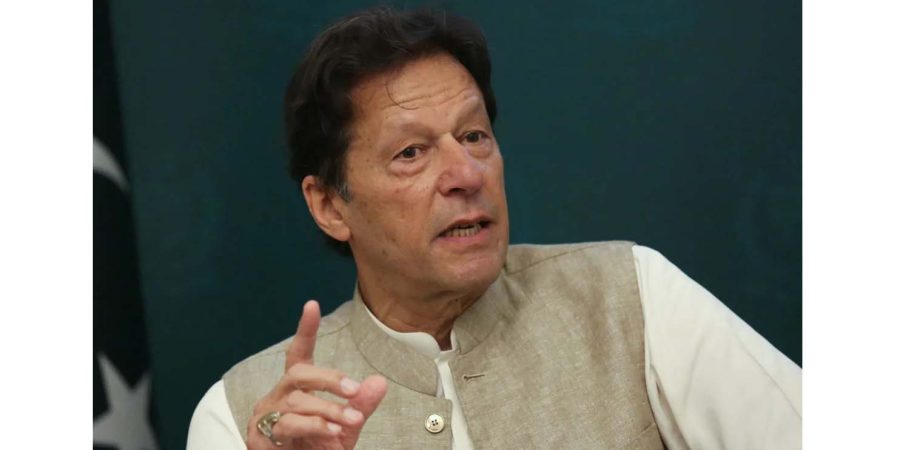 ISLAMABAD: /DNA/ – Inviting the people to participate in countrywide anti-inflation, Pakistan Tehreek-e-Insaf (PTI) Chairman Imran Khan came down hard on the imported government and said that these band of crooks and looters had nothing to do with the public welfare, as they mortgaged the country to fill their coffers.

PTI Chairman urged the inflation-stricken masses to come out of their homes and participate in the anti-inflation protest today (Sunday), as they would decide the future course of action together.

Imran Khan made these remarks while chairing an important meeting of the party spokespersons here on Saturday.

During the meeting, PTI Chairman congratulated Hammad Azhar and the members and officers of the FATF Coordinating Committee for working hard to achieve the milestone to ensure Pakistan’s delisting from FATF grey list.

They also reviewed the preparations for nationwide anti-inflation protest to be held on Sunday on the call of PTI Chairman Imran Khan.

Imran Khan said that the PTI government always worked as a bulwark for the people against any scourge and global inflation but this corrupt ruling junta mortgaged the country to fill their coffers at the cost of the people.

PTI Chairman went on to say that the people of the country were reeling under back-breaking inflation, because these corrupt rulers kept their wealth abroad; hence they were neither concern about their hardship nor of the future of the country.

However, Imran Khan made it clear that the PTI would not tolerate the situation anymore and crooked rulers would not allow to play with the future of the country and its people.

He said that the imported government must bear in mind that people cannot be stopped from raising voice for their due rights through use of force and coercion.

PTI Chairman said that all the characters of the conspiracy and their targets badly exposed during the last two months, who were imposed without preparation to conspiracy to save their corruptions at the cost of the future of the country.

He said that the imported government was hell-bent destroying state institutions. Imran Khan warned that if they destabilized the flourishing economy, the situation would get out of control.

During the meeting, they also analyzed that the friendly countries and the IMF gave no value to the imported government because they were well-aware of the fact that they did not enjoy public support and credibility.

They also strongly condemned the government’s brutal tactics to curb freedom of expression, especially harassment of citizens on social media.

The meeting also expressed deep concern over the lackluster response of public in the by-elections in Karachi and the failure of the Election Commission of Pakistan (ECP) to hold free, fair, credible and peaceful election.

Moreover, during the meeting, they voiced concern over a whopping Rs. 21 billion budget cut for the tribal districts of KP by the imported government.

They vowed that any attempt and conspiracy to roll back the integration of FATA would be resisted.

Besides, they also strong condemned the propaganda campaign against the front line social welfare institutions run under the auspices of the corrupt fugitive leader.

« Maryam Nawaz lashes out at PTI chairman over call for protest against inflation (Previous News)
(Next News) PM, SCP urged to take notice of sorry affairs at Alpine Club »