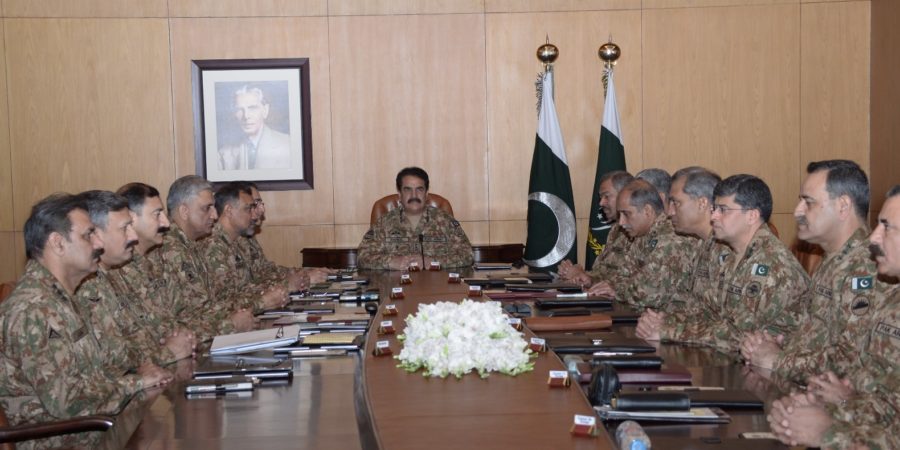 Rawalpindi October 14: Corps Commanders Conference was held today at GHQ. General Raheel Sharif, COAS presided over the meeting which was attended by all Corps Commanders and Principal Staff Officers.
Participants held a comprehensive review of internal and external security situation with particular focus on prevailing environment at LOC and operational preparedness of the Army.
Rejecting the absurd Indian claims of hoax surgical strikes as an attempt to divert world’s attention, away from brutalities being committed by Indian Army against innocent Kashmiries, the forum resolved that any attempt of misadventurism and irresponsible act will be met with the most befitting response.
While expressing complete satisfaction over operational preparedness of the troops, COAS reiterated Pakistan Army’s resolve to defend the motherland at any cost against full spectrum of threat.
Recounting the successes of Operation Zarb-e-Azb so far and resultant stability being achieved to propel Pakistan in to a new phase of development and prosperity,COAS re-emphasized the need for sustained efforts on internal security to defeat all hostile attempts to reverse our gains.
The participants resolved to continue sustained and focused combing and intelligence-based operations across the length and breadth of the country to uproot terrorism harmonizing it with implementation of NAP to address extremism and other causes of terrorism.
Participants expressed their serious concern over feeding of false and fabricated story of an important security meeting held at PM house and viewed it as breach of national security.
Meanwhile name of Cyril Almeida was removed on Friday from ECL.
PAKISTAN No Comments »